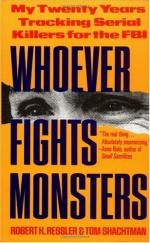 Robert Ressler
This Study Guide consists of approximately 25 pages of chapter summaries, quotes, character analysis, themes, and more - everything you need to sharpen your knowledge of Whoever Fights Monsters.

This detailed literature summary also contains Topics for Discussion and a Free Quiz on Whoever Fights Monsters by Robert Ressler.

The story begins with a description of the "Vampire Killer" Richard Chase, a crazed young man who though that by killing people and drinking their blood, he could replenish his own blood that he was convinced was being poisoned by Nazis. After killing several people and drinking their blood near Sacramento, he was eventually caught, partly due to Ressler's very accurate profile. Ressler then goes on to tell how he initially became involved in law enforcement and them moved to the FBI and began profiling. Once at the FBI, he began a program to interview serial killers that later turned into the Criminal Personality Research Project and into a full-fledged profiling unit at the FBI. During this time, Ressler traveled around the country interviewing famous killers and collecting their stories into the files that he would later use to develop his profiling method. Sometimes these interviews became dangerous, like when Ressler interviewed Edmund Kemper who, jokingly, threatened to kill him. Overall though, the interviews allowed Ressler to get a better hold on the psychology and motivation of the killer that he was trying to catch.

Over time, Ressler began to develop different ways of distinguishing and identifying serial killers. Almost all serial killers had dysfunctional childhood, for instance, though exactly what was wrong would often be different. Some were physically or sexually abused, others were emotionally abused, but all had strained relationships with their families. Almost none were able to create and maintain normal sexual relationships and many became increasingly isolated by the outside world. Some of these people developed severe mental impairments, including extreme psychotic delusions. Sometimes they thought god, or a demon, or their dead father was telling them to kill people. Other times they felt the need to drink blood or engage in cannibalism. Another group became more extroverted personality-wise as they became more isolated. These people tended to kill out of compulsion and for sexual gratification. Unlike the disorganized types, these organized killers would tend to be more careful and discriminating in their crimes, making them more dangerous and harder to find. Sometimes they would stage a crime scene to throw police off the track or to make it look like someone else had committed the murder.

Over time, Ressler began to perfect his method and to teach it to other FBI agents and other police. Even crime writers, including the author of Silence of the Lambs Tom Harris were interested in Ressler's technique and some incorporated it into their work. Even though Ressler eventually retired from the FBI, he never stopped arguing for the need for more information on these dangerous killers so that we can protect ourselves from them. He even went so far as to argue against the death penalty for these killers so that they could be kept alive for us to study them.

More summaries and resources for teaching or studying Whoever Fights Monsters.