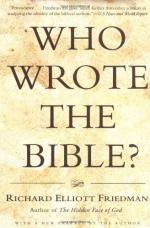 Richard Elliott Friedman
This Study Guide consists of approximately 40 pages of chapter summaries, quotes, character analysis, themes, and more - everything you need to sharpen your knowledge of Who Wrote the Bible?.

Who Wrote the Bible? Summary & Study Guide includes comprehensive information and analysis to help you understand the book. This study guide contains the following sections:

This detailed literature summary also contains Topics for Discussion and a Free Quiz on Who Wrote the Bible? by Richard Elliott Friedman.

The Bible as we know it today has existed for thousands of years. One of the most published books in the world, individuals often own more than one copy and possibly more than one translation. Standing at the core of two world religions, Christianity and Judaism, the Bible also rises to great literature and history. However, even with all the study that goes into the Bible, few people know exactly who wrote it.

Richard Elliot Friedman sets out in his book to rectify this situation. He first introduces the world of the investigative biblical scholar. For millennia all questions about the Bible had been suppressed and harshly resisted. In the middle of the eighteenth century, some investigators become published, and by the late nineteenth century, four authors of the Pentateuch are identified. The major Jewish and Christian world religions accept investigative biblical scholarship by the mid-twentieth century.

Four letters designate the authors of the Pentateuch—E, J, D and P. The E author always refers to God as El and the J author refers to God as Yahweh (mistranslated as Jehovah). The D author wrote Deuteronomy and the P author wrote priestly passages, especially lists of laws as can be found in Leviticus. Friedman identifies D as Jeremiah but does not have specific identities for E, J or P. A fifth person involved with the Pentateuch is the redactor or R, a person who brings all the texts together. Friedman proposes that Ezra is R.

Ancient Jewish history is central to Friedman's arguments. Two major areas develop, the Kingdom of Israel and the Kingdom of Judah. The Kingdom of Israel begins its own Temple in order that people there can more conveniently bring their livestock for sacrifice. While the Temple in Jerusalem uses cherubs to form the throne of God, the Temple in Israel uses cast golden calves for the same purpose. This split becomes contentious between the two priesthoods, the northern Israeli that honors Moses and the southern Judah that honors Aaron. These differences become reflected in the Bible and help to determine which text was written by whom.

Friedman emphasizes that investigative biblical study does not attempt to destroy anyone's faith. Rather, a greater understanding of the Bible and how it developed leads to greater possibilities for interpretation. For example, the notion of God as being both just and merciful arises due to the conflicts between two priesthoods, and as such may be a more accurate portrayal of God than either priesthood's stance.

More summaries and resources for teaching or studying Who Wrote the Bible?.

Who Wrote the Bible? from BookRags. (c)2022 BookRags, Inc. All rights reserved.