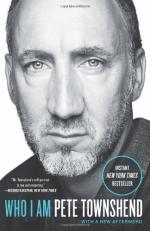 Who I Am: A Memoir Summary & Study Guide

Pete Townshend
This Study Guide consists of approximately 52 pages of chapter summaries, quotes, character analysis, themes, and more - everything you need to sharpen your knowledge of Who I Am.

Who I Am: A Memoir Summary & Study Guide Description

Who I Am: A Memoir Summary & Study Guide includes comprehensive information and analysis to help you understand the book. This study guide contains the following sections:

This detailed literature summary also contains Topics for Discussion on Who I Am: A Memoir by Pete Townshend.

Pete Townsend is a famous rock star, and the lead guitarist as well as the main songwriter for the incredibly successful band, The Who. In this biography he tells the story of his life, analyses his own behavior, and eventually comes to the conclusion that he is comfortable with and proud of who he is.

Pete's parents were musicians in a war-time and post-war band called The Squadronaires. Pete traveled with them on their tour bus and to holiday camps where they performed. He had a strange childhood and never felt completely loved or protected by his parents. For a while he was sent to live with his maternal grandmother Denny, where he suffered sexual abuse from the men who visited her. This had a strong, negative impact on his life.

When Pete moved back in with his parents, he learned to play the guitar and joined a school band. While attending art college he joined Roger Daltrey's band, in which his school friend John Entwistle was also playing. The band grew in popularity and changed their name to The Who. They began to play regular gigs and earned a lot of money. They gained a manager, and even began performing as support acts for major bands like The Kinks and The Rolling Stones.

Pete quit college to go full time with the band. Two men called Kit and Chris bought the band and started to make records. The band went from success to success, including an album called 'Tommy' that was hugely successful when played live. The Who toured America, and later they played at Woodstock, where they were rocketed into rock fame and stardom.

Meanwhile, Pete had married his childhood girlfriend Karen Astley and they had two daughters, and later a son. They were happy at first, but Pete's rock lifestyle was having a bad effect on their marriage. Pete was throwing himself into his work, and also becoming addicted to drugs and alcohol, problems he battled with for the rest of his career. Pete began to have affairs, and eventually the marriage broke down completely. Pete moved out, and began seeing a woman called Rachel Fuller who also worked in the music business. They are still together now.

Pete struggled against addiction for a long time until he realized that he would need to face his own past and self-destructive personality before he could cure himself. He managed to address his rage and guilt over the sexual abuse of his childhood, and he also managed to deal with his anxiety and learned to be thankful for what he had. After therapy and rehab, Pete did eventually manage to conquer his drug and alcohol problems, and he also began to see that work could be just another addiction too. He is now happier and understands himself better.

The band was also beginning to fall apart. Keith had a lot of problems with drug addiction, and eventually died in 1978. The others continued without him and a new drum player joined, Kenney Jones. The band continued to perform and to tour, especially when John needed help with money problems, but the members were also pursuing their own personal projects as well. Pete himself had a lot of success with live performances and a film of "Tommy", with a film called "Iron Man" (later changed to "The Iron Giant"), and various other projects.

In 2002 John Entwistle died, and Pete could not face continuing with the band. However, they have re-formed for charity events and occasional performances, and The Who continues to be successful.

More summaries and resources for teaching or studying Who I Am: A Memoir.

Who I Am: A Memoir from BookRags. (c)2022 BookRags, Inc. All rights reserved.