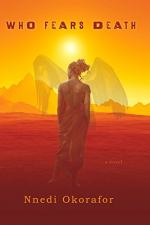 Nnedi Okorafor
This Study Guide consists of approximately 46 pages of chapter summaries, quotes, character analysis, themes, and more - everything you need to sharpen your knowledge of Who Fears Death.

This detailed literature summary also contains Quotes and a Free Quiz on Who Fears Death by Nnedi Okorafor.

The following version of this book was used to create the guide: Okorafor, Nnedi. Who Fears Death. DAW books, 2010.

Who Fears Death is divided into three parts (Becoming, Student, and Warrior). The first Part contains Chapters 1-17; the second Part contains Chapters 18-25; the third Part contains an untitled preface, Chapters 26-60, an epilogue, Chapters 61-62, and a final Chapter 1. The novel describes Onyesonwu’s life from birth to her death/resurrection, although the main plot of the novel begins at age six when she and her mother move to Jwahir. It is narrated almost entirely by Onyesonwu’s voice, which is transcribed onto a laptop by an unnamed interlocutor she meets during her final imprisonment.

The first chapter begins with the death of Onyesonwu’s Papa, which occurs when Onyesonwu is sixteen. The narrative then jumps back to her arrival in Jwahir. She is born from her Okeke mother Najeeba and Najeeba’s rapist, a Nuru man whose name Onyesonwu does not know. Because of this, Onyesonwu is called ewu, a word which marks her as the result of a Nuru man raping an Okeke woman. Najeeba’s rape and the destruction of her village force her to wander the desert, where she raises Onyesonwu for the first six years of her life.

Onyesonwu grows up in Jwahir, where she is ostracized because of her ewu heritage. However, a blacksmith named Fadil Ogundimu treats her well, and eventually meets her mother. Fadil and Najeeba marry and Fadil becomes Onyesonwu’s Papa. Onyesonwu chooses to undergo female circumcision when she turns eleven in an attempt to become more normal and stop bringing shame upon her parents. Through this, she bonds closely with the three other girls who undergo the rite with her: Binta, Diti, and Luyu. Soon after the rite, a boy named Mwita arrives at school. He, too, is marked as ewu. Mwita and Onyesonwu bond over their shared heritage and shared powers, but Onyesonwu is resentful of him because Mwita is trained by Aro, the local sorcerer, who refuses to train Onyesonwu because she is a girl.

After the death of Onyesonwu’s Papa, Aro agrees to train her because he believes she will become dangerous if left untrained. Part 2 begins with Onyesonwu’s return to school 10 days after her Papa’s death, and then her first visit to Aro as a student 18 days after that. During her initiation, she experiences what she later realizes is her own death. She grows closer with Mwita and her friends during her time as a student and develops her powers of shape shifting, resurrecting creatures, and traveling in the ‘wilderness’ (a spirit world or afterlife). She also grows back her own clitoris, an important act which returns her sexual agency to her and allows her to enjoy sex with Mwita. This apprenticeship ends when people in the market in Jwahir mock Onyesonwu, which enrages her, especially because they are so indifferent to the plight of the Okeke in the west. This leads her to use her powers to force everyone around her to relive her mother’s rape. After this, she feels apprehensive about living in the town and more passionate about helping the situation in the west. Onyesonwu, Mwita, Binta, Diti, Luyu, and Diti’s fiancé Fanasi decide to travel westward across the desert to the heart of the violence. After making this decision, Onyesonwu learns that she has been prophesied to rewrite the Great Book which governs the political order of the region and thus stop the violence in the west.

Part 3 begins in the desert, where tensions grow within the group because of the stresses of living in the desert rather than in the comfortable town of Jwahir. Onyesonwu uses her powers to regrow her rite mates’ clitorises. Nonetheless, tensions continue to grow as Luyu and Fanasi start to have sex with each other despite Fanasi’s betrothal to Diti. During their travel westward, they enter a town to load up on supplies, where the townspeople stone Mwita and Onyesonwu because of their ewu appearance. One townsperson throws a brick at Binta, killing her instantly. Unable to resurrect Binta, Onyesonwu strikes out in rage, blinding the entire town.

After Binta’s death, the five remaining travelers encounter the Vah, a tribe of people who travel in the eye of a sandstorm. The Vah invite them to stay with them for the three weeks they plan to remain there. Onyesonwu Holds Conversation (prays/converses) with Ani (the widely-recognized goddess) with the other Vah women, and meets a Kponyungo (a firespitter, a supernatural creature) who leads her to the east, where she sees a lush tropical forest. Energized by this experience, she attempts to spirit travel to the west and attack Daib. However, Daib is ready for her, and places evil juju (magic) on her right hand which poisons her slowly.

The Vah sorcerers work together to free her of the juju. During this time, the head sorcerer Ssaiku stops maintaining the sandstorm which keeps the Vah separate from the rest of the desert. Diti and Fanasi take advantage of this and head back to Jwahir. Luyu, Onyesonwu, and Mwita remain, and continue westward after the Vah move on. They encounter downtrodden Okekes in villages but these Okekes welcome Onyesonwu, especially after she begins to heal the sick in the villages. Eventually, they make their way to Durfa, the city where Daib works in his military headquarters. Mwita and Onyesonwu attack Daib in his office as Luyu keeps watch on the first floor of the building. Daib kills Mwita. Onyesonwu uses her shapeshifting powers to move an egg inside her uterus towards Mwita’s sperm, as she was warned by Aro that conceiving while still learning about powers would result in massive destruction. Upon the moment of conception, a blast moves outwards from her, destroying the headquarters and injuring Daib. Luyu and Onyesonwu escape the ruins, and Onyesonwu notices Daib escaping the headquarters as a bat. She does not worry, though, as she is certain that Daib will die soon enough.

Luyu and Onyesonwu realize as they run towards the lake at the center of the kingdom that Onyesonwu’s blast has killed all fertile men within an unspecified radius and has impregnated all the fertile women, including Luyu. The remaining Nuru men attempt to attack them, but one Nuru man helps them escape the shore and paddle towards the island inside the lake. There, Luyu stands guard as Onyesonwu finds the Great Book which Daib has been rewriting. She rewrites the whole book with Nsibidi, a magical script. Nuru men reach the island and kill Luyu, then take Onyesonwu prisoner.

The epilogue is told from the perspective of the Nuru transcriber listening to Onyesonwu’s story. This character describes Onyesonwu’s death by stoning, after which he works with his twin to dig out Onyesonwu’s body from the fused sand around her. The epilogue ends with the transcriber thanking Onyesonwu for saving the Seven Rivers Kingdom.

After the epilogue, Sola narrates the last two chapters which describe Onyesonwu instead escaping from the attempted execution. Onyesonwu transforms into a Kponyungo and flies to the east, where she meets Mwita under an iroko tree in the green tropical forest. On a broader scale, change in Nuru-Okeke-ewu relations has begun in the periphery, although the people in the center of the Seven Rivers Kingdom are still enraged at Onyesonwu.

More summaries and resources for teaching or studying Who Fears Death.