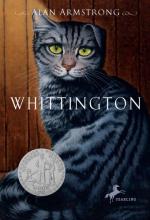 Alan Armstrong
This Study Guide consists of approximately 40 pages of chapter summaries, quotes, character analysis, themes, and more - everything you need to sharpen your knowledge of Whittington.

This detailed literature summary also contains Topics for Discussion and a Free Quiz on Whittington by Alan Armstrong.

This novel for young people entwines two contemporary plot lines with a retelling of a classic fable - the story of Dick Whittington and his remarkable cat, as told by a cat who is, in many ways, remarkable himself. As all three plot lines explore issues relating to the power of courage to overcome difficulties, the book also explores the nature and value of friendship, compassion, and interdependence.

The story begins with a meeting between The Lady, a somewhat self-important duck, and Whittington, a lonely and somewhat ugly cat. After Whittington tells The Lady that he is looking for both a home and friendship, The Lady agrees to introduce him to the other members of the animal community in which she lives. The other animals are at first reluctant to welcome another predator into their group, but The Lady convinces them to do so, and Whittington has a new home in the barn of a farmer named Bernie, who has a habit of bringing home animals who need special care and/or attention.

Bernie's two grandchildren, Abby and Ben, visit the barn and its inhabitants regularly. One day, in order to entertain both the children and the other animals, Whittington begins telling the story of the boy after whom he was named, Dick Whittington, who began his life in desperate poverty but over the course of several years and after several adventures, became the Lord Mayor of London. Over the course of the winter, and as Bernie brings several new arrivals into the barn community, Whittington continues his story, telling how Dick escaped his life of poverty, made his way to London, found himself a new home and a new line of work, and made friends with a remarkable cat who became his best friend. Eventually, Whittington says, Dick voyaged across the sea to exotic lands, at one point leaving his cat behind and at a later point happily being reunited with her, but at a still later point eventually losing her during a storm at sea. Whittington adds, however, that she left behind two kittens, one of whom was his ancestor. Eventually, Whittington says, Dick married the love of his life, became a successful merchant, and eventually was elected Lord Mayor.

Meanwhile, over the course of the several weeks that Whittington is spinning out his story, he continues to deepen his friendships with the animals in the barn, and with Bernie's grandchildren, one of whom (Ben) has troubles of his own. He has difficulty reading, and despite the help of his sister and the animals, and despite the inspiration provided by the story of Dick Whittington, he finds himself unable to progress as rapidly as the principal of his school thinks he should. Fearful and resentful of being teased by his classmates, Ben at first resists additional efforts to help him improve his reading, but a visit to a special Reading Recovery program, taught by the inspiring Miss O'Brian, known as Coach O, convinces him that he should try what she suggests.

Winter turns into spring, and spring turns into summer. More animals are brought to the barn, and young animals are born and taken care of. Sometimes there is violence between the animals in the barn or as the result of attacks from outsiders, but the friendship and support of the animals within the barn quickly makes things peaceful again. Meanwhile, Whittington continues to tell his story, and Ben continues to struggle to read. One day, however, close to the end of the summer, Whittington announces his intention to leave his barn family and take one of his children, who was born to a lady cat up the road, to meet Whittington's previous owner. Ben, meanwhile, reaches the reading goal set for him by Coach O, and the book ends with a sense of celebration all round. The friendships born in the barn and nurtured by the life there have brought their rewards.

More summaries and resources for teaching or studying Whittington.