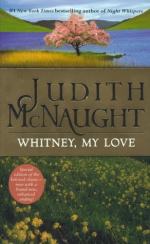 Judith McNaught
This Study Guide consists of approximately 46 pages of chapter summaries, quotes, character analysis, themes, and more - everything you need to sharpen your knowledge of Whitney, My Love.

This detailed literature summary also contains Topics for Discussion and a Free Quiz on Whitney, My Love by Judith McNaught.

WHITNEY, MY LOVE is the first novel by romance author Judith McNaught. Whitney is a wild young woman who has been sent to France to live with an aunt and uncle after her father has decided he can no longer deal with her scandalous behavior. There Whitney meets the Duke of Claymore, an attractive man with a reputation for making even the most socially elite women his mistresses. Whitney barely recalls these meetings, but they have made such an impact on the Duke that he arranges a betrothal contract with Whitney's father. The only stipulation is that Whitney not be told about it until the Duke feels the time is right. This leads to a comedy of errors as Whitney, who believes herself to be free, attempts to seduce her childhood crush and lure him into a betrothal. WHITNEY, MY LOVE is a romance of misdirection that will leave the reader breathless until the final pages.

Whitney is a wild child who often indulges in crazy stunts, like riding a horse standing up while wearing men's trousers. As a result, Whitney's father sends her to France to live with her aunt and uncle. Whitney is heartbroken, not because she will miss her selfish, unemotional father, but because she will be leaving her childhood crush, Paul Sevarin. In Paris, Whitney becomes a young woman, making her debut into society and garnering marriage proposals from men of all walks of life. However, Whitney refuses them all, determined to return to England and convince Paul to marry her. Eventually Whitney is called home but not for the reasons she believes.

Whitney decides she will elope with Paul. Whitney anxiously awaits Paul's return from a business trip. When he does return, Paul is outraged at the idea of an elopement and what it will mean to his family. Paul is also upset that Whitney will not have a dowry because he has just spent what he expected to receive in a dowry on horses while his home is in foreclosure. Whitney is shocked by Paul's behavior and calls off the engagement. Whitney then decides to go to London to surprise Clayton and to inform him that she is willing to marry him now.

Clayton is anxious to see Whitney so instead of going to London upon returning from a trip to his ancestral home, Claymore, he decides to go straight to Whitney's home. However, Clayton hears a rumor that Whitney is in London picking out her trousseau for her marriage to Paul. Clayton rushes to Whitney where he hears another rumor that Whitney is not a virgin. Clayton snatches her from a party and drags her to Claymore. Once there, Clayton forces himself upon Whitney in order to humiliate her for playing him for a fool only to discover that she is indeed a virgin. Clayton is horrified by his own actions and decides the best thing to do is to remove himself from Whitney's life.

Whitney is also traumatized by Clayton's actions, but she still loves him and hopes they will marry. When Clayton fails to visit her in the weeks after his attack, she becomes disillusioned. Finally, when Clayton shows up at a wedding in which Whitney is a bridesmaid, she is so relieved to see him that she gives him the impression that she wants to make amends. However, before the reception, Whitney sees the legal documents Clayton signed releasing Whitney from their betrothal contract. Whitney becomes enraged, believing that Clayton was playing her for a fool. Whitney humiliates Clayton at the wedding reception and leaves him with little doubt that she no longer wants to marry him.

Weeks pass by and Whitney finds herself unable to stop thinking about Clayton. When Whitney confesses everything to her friend Emily, Emily helps her see that Clayton's actions were not that of a man trying to wound his love but expressing his regret. Whitney decides she must see Clayton. Whitney writes a note claiming to be pregnant but decides that note will not repair the rift between them but might make it worse. Instead, Whitney writes a note asking for permission to see Clayton at Claymore. When Whitney arrives the following day, she discovers that Clayton has not arrived, but his brother and mother are there. Aware of Clayton's feelings for Whitney, Clayton's brother Stephen encourages Whitney to stay. Stephen tells Whitney she should anger Clayton, force him to remove her from the room so they can speak alone. Whitney does just that and convinces Clayton that she loves him. Clayton asks her to marry him.

Clayton and Whitney are married two months later. They live in marital bliss for five months before Whitney finds she is pregnant. Whitney is reluctant to tell Clayton at first, concerned he will not be happy with the pregnancy. However, Whitney knows she cannot hide her condition for long. Whitney buys several baby outfits and embroiders a W into the collar of one. Whitney then leaves the tiny outfit in her stationary drawer and sends Clayton to find a letter for her. When Clayton opens the drawer, instead of finding the little outfit, he finds the letter claiming a pregnancy. Clayton believes the note was intended for another man and becomes enraged with jealousy. Clayton moves out of their bedroom and begins treating Whitney as though she is a stranger.

Whitney endures Clayton's anger after discovering the cause for it, hoping he will eventually come to see the truth. When Clayton's treatment of Whitney becomes unbearable, she leaves their home. Clayton slowly begins to realize that the note Whitney wrote could not have been meant for another man and he begins to see the error in his anger. Clayton looks for Whitney but fails to find her anywhere. Clayton finally learns that Whitney is staying with his mother. Clayton begs Whitney for forgiveness and finds that she forgave him the moment she learned the source of his anger. A short time later, Whitney suffers a fall and gives birth to a son prematurely. However, they both survive. Whitney is then given a chest that is filled with the love stories of many generations of Claymore dukes and their duchesses, to which she adds her own story.

More summaries and resources for teaching or studying Whitney, My Love.