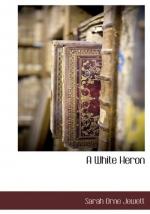 Introduction & Overview of A White Heron

Sarah Orne Jewett
This Study Guide consists of approximately 43 pages of chapter summaries, quotes, character analysis, themes, and more - everything you need to sharpen your knowledge of A White Heron.

When "A White Heron" appeared in 1886 as the title story in Sarah Orne Jewett's collection A White Heron and Other Stories, the author was already established as one of the finest local color writers the United States had produced. This was Jewett's eighth published book, and she had enough influ-ence with her publisher, Houghton, Mifflin, to open the book with the story, although it had already been rejected by the Atlantic Monthly magazine as too sentimental and romantic. Jewett's instincts, in this case, were right. The story of a young forest-dwelling girl who must choose whether or not to tell a handsome young hunter the secret of where the rare white heron has its nest was immediately recognized by critics as a treasure; it has since become the most admired and most widely anthologized of Jewett's nearly 150 short stories. While some critics have faulted the story for its shifts in narrative point of view which they saw as lack on control on the author's part, others have praised Jewett's narrative shifts, which they find add an important dimension to the narrator's role. Over the past century critics have explored themes of good versus evil, flesh versus spirit, nature versus civilization, feminine versus masculine world view, and innocence versus experience in "A White Heron." Mary E. Wilkins Freeman, another well-regarded nineteenth-century New England writer, praised the story. An anonymous 1886 reviewer in the Overland Monthly called it "a tiny classic," and noted that its themes "never were interpreted with more beauty and insight."

More summaries and resources for teaching or studying A White Heron.

A White Heron from Gale. ©2005-2006 Thomson Gale, a part of the Thomson Corporation. All rights reserved.