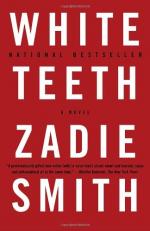 Zadie Smith
This Study Guide consists of approximately 56 pages of chapter summaries, quotes, character analysis, themes, and more - everything you need to sharpen your knowledge of White Teeth.

This detailed literature summary also contains Topics for Discussion and a Free Quiz on White Teeth by Zadie Smith.

White Teeth is the first novel of young London novelist Zadie Smith, following the lives of members within two unique families. Archie Jones, patriarch of one family, is an indecisive man on the brink of suicide when he finds true love for the first time and begins a new life with his Jamaican bride. Samad Iqbal is Archie's good friend, head of a family of second-generation immigrants who fail to understand their father's obsession with the traditions of the past. Both men struggle not only with raising their children, but also with dealing with strong wives who hold opinions of their own. White Teeth explores the dysfunction within all families with humor and humility.

Archie sits in his car, determined to kill himself due to a bad divorce, until the owner of a nearby butcher urges him to move on. Archie sees this man as a symbol that life has re-embraced him and he decides to live. Archie goes for a drive and finds himself at the home of a young man who had thrown a large New Year's Eve party. Archie thought this might be a place where he could begin a new life, so when he meets Clara Bowden it seems like fate. Within a few months the couple is married. Shortly after the wedding, Archie moves Clara into a house a few blocks away from the home of his good friend Samad Iqbal. Clara and Samad's wife, Alsana, become good friends over the next few months when they become pregnant at the same time.

After the birth of his twin boys, Samad becomes the ideal father, immersing himself in the politics of their school. However, in doing so, Samad finds himself becoming obsessed with a young teacher at the school. Due to the restrictions of his religion, Samad is tortured with guilt over his obsession with this young woman and comes to realize that his own sons will come to suffer even greater than he has from the temptations of the Western world due to their lack of exposure to their home land and its traditions. Samad decides the only way to protect his children from this downfall is to send them home. However, Samad cannot afford to send both boys, so he is forced to choose between them. Samad sends the elder of the two boys in secret, incurring the wrath of his wife.

Several years pass while the children grow older. Magid, the eldest Iqbal son, embraces the culture of Bangladesh, raising his father's hopes that he might join the church. Millat, Magid's twin, is the opposite, getting into trouble constantly. Archie's daughter, Irie, is intelligent and obedient, but so deeply in love with Millat that trouble seems to follow her every move. At 16, Irie and Millat get caught up in a drug raid at their school and as a punishment are sent to study with a fellow student in his home.

The Chalfens, whose names are Joyce and Marcus, welcome Millat and Irie into their family. Joyce, a gardening expert, takes Millat under her wing as though he is one of her own sons in need of guidance. Marcus, a scientist, welcomes Irie's organizational skills and gives her a job working in his office. Clara and Alsana are not happy with their children's new family, feeling pushed out of their own roles. When Marcus begins to correspond with Magid, tensions grow to a boiling point. Against Samad's wishes, Marcus encourages Magid to become a lawyer and pays to bring him back to England. While happy to see their son again, Samad and Alsana are outraged at Marcus and Joyce's presumptuous involvement in their children's lives. Alsana and Joyce battle over Millat while Clara attempts to set down some ground rules with Irie. Both confrontations backfire, encouraging yet more rebellious behavior in their children.

During this time, Marcus has been working in genetics on mice. One of his mice is due to be put on public display. Many organizations become upset about this mouse, believing that Marcus's work is an example of cruelty to animals. One of these groups is KEVIN, an organization of which Millat is a part. Both families converge on the ceremonies opening this display to support Irie and Magid in their work with Marcus. During the ceremonies, Millat pulls a gun to kill Marcus in order to make a statement against animal cruelty. However, recognizing Millat's intentions, Archie jumps in front of the gun and takes a bullet in his leg. Luckily Millat receives a light sentence and the families continue to live in happy dysfunction.

More summaries and resources for teaching or studying White Teeth.