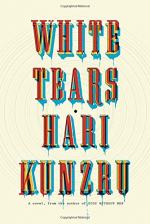 The following version of this book was used to create this study guide: Kunzru, Hari. White Tears. New York: Alfred A. Knopf, 2017.

The story opens in modern-day New York City. Seth is a white man in his early twenties who is living with his best friend, Carter Wallace. Seth and Carter met in college and bonded over music, despite the fact that Seth is highly introverted while Carter is highly extroverted. Carter, also white, is solely interested in music by black musicians of the twentieth century. Carter is from a very wealthy family, so he pays for his and Seth’s living expenses. Carter also bankrolls the music audio engineering business that Seth and Carter run together. One day, using recordings that Seth made of different people singing and playing music on the street, they create a song called the Graveyard Blues and upload it to the internet, attributing the song to Charlie Shaw, a name that Carter picks at random. People on the internet believe it to be a lost blues song from the 1920s.

One person on the internet—screen name JumpJim—sets up a meeting with Seth about the song. Jim says that Charlie Shaw was a real musician and the Graveyard Blues was a song by him. Soon after, Carter is found beaten unconscious in a dangerous Bronx neighborhood. Carter’s wealthy and powerful family bars Seth from coming to see Carter at the hospital. They also lock Seth out of his and Carter’s recording studio. Carter appears to be in a permanent coma. Seth tracks down Jim, who tells Seth of his own connection to Charlie Shaw. In the 1950s, Jim and his friend Chester Bly traveled to Tennessee and Mississippi in order to swindle African-Americans out of potentially valuable blues and jazz records. They eventually arrived at the house of Miss Alberta, Charlie Shaw’s sister. She possessed the only known copy of Shaw’s Graveyard Blues record. Bly stole the record after Alberta refused to sell it. Soon after, Bly died in a mysterious fire. Jim decided that Bly’s death must have been a type of cosmic comeuppance for his acts of cultural appropriation. In order to avoid similar danger, Jim sold all of his own records.

Jim relates the story to Carter’s sister, Leonie, and they decide to journey to Miss Alberta’s home to see if they can find any useful information regarding Charlie Shaw. However, when they find the house in Mississippi, the current residents claim that they have never heard of Miss Alberta or Charlie Shaw. During the return journey, Leonie is murdered in a motel room. The police arrest Seth but then release him after indicting a black man who happened to be near the scene of the crime. Seth wanders the country, looking for more evidence about Charlie Shaw. He eventually arrives in Jackson, Mississippi, the place of Shaw’s last known whereabouts. There, Seth discovers that the Wallace family originally made its fortune by exploiting black prison inmates for free labor, and it appears to continue to do so.

Charlie Shaw briefly narrates his own life story. He was arrested in Jackson for accidentally wandering into a white neighborhood. He was then forced as an inmate to provide physical labor for the Wallace family. The spirit of Charlie Shaw possesses Seth and stabs Cornelius Wallace—Carter’s older brother—to death. Seth is arrested and imprisoned. The end of the novel implies that Carter’s parents are also dead and that all of these recent acts of violence against the Wallace family were perpetrated during periods when Shaw possessed Seth in order to gain revenge.