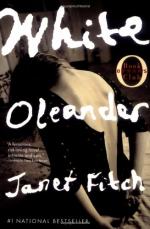 Janet Fitch
This Study Guide consists of approximately 70 pages of chapter summaries, quotes, character analysis, themes, and more - everything you need to sharpen your knowledge of White Oleander.

Astrid is a twelve-year-old girl who lives with her beautiful mother, Ingrid, a poet. Her mother is the kind of beauty who turns people's heads. Ingrid sees herself as a Valkyrie who would rather rule in Hell than serve in Heaven. She sees herself stronger and tries to live her life in simple elegance. Astrid's delicate balance crumbles when her mother falls in love with Barry Kolker, who is the type of man Ingrid deems unworthy of her. When Barry, after wooing her and slipping into their lives, drops her without warning, Ingrid becomes quite psychotic, resulting in his murder.

While her mother is in prison, Astrid has the first-hand experience of the foster care system. The first foster mother is Starr, an ex-stripper and alcoholic. She professes to believe in Jesus Christ but her lifestyle and attire suggest otherwise. As Astrid turns fourteen, she finds herself falling in love with Starr's hippie boyfriend, Ray. The lure of Astrid's innocent beauty is too much for Ray to resist, and they cross over the line and start a sexual relationship. Starr, noticing this, goes off her abstinence from alcohol and even breaks her son's arm. Finally, everything ends in bloody violence as Starr shoots Astrid three times and runs away. Ray, the man Astrid loves so much, does not stay to help her. The only person who stays is Davey, Starr's son, who is now thrust into the foster care system, because of Astrid.

Astrid's next foster mother is Marvel Turlock who only wants Astrid as a wage-free servant. She is also an avowed racist who wastes no opportunity to slur insults at her neighbor who is an elegant black woman. Her name is Olivia Johnstone. Despite Marvel's warning not to associate with her, Astrid is drawn to Olivia's elegance. Olivia used to be a loan officer with an MBA, but she now makes a living by pleasing men. Through Olivia, Astrid learns the pleasure of luxury. However, Olivia is not as beholden to Astrid. One night, on her walk to calm her restlessness about Olivia, vicious dogs attack Astrid, leaving scars on her face, arms and legs. Christmastime comes, and Astrid escapes to Olivia's house, where they both get drunk. There's a great uproar when Marvel catches her coming out of Olivia's house. Marvel hits her, despite her stitched wounds, and calls the police. Astrid manages to protect Olivia but has to leave without being able to say good-bye when Marvel calls the Children's Service while she's at school.

All this while, letters from Astrid's mother continue coming. The letters are always full of her mother's news, hardly ever asking after Astrid. For Ingrid, Astrid has always been an extension of herself, someone who shares in her feelings.

Astrid's third foster mother, Amelia Ramos, is an aristocratic woman from Argentina. She lives in a beautiful house with several foster girls, but her true purpose is to appropriate the government subsidy for her own use. She starves them, by feeding them nothing but dinner during weekdays. In her hunger, Astrid is forced to rummage through trashcans and panhandle. Ms. Cardoza, the caseworker who brought her to Amelia's house, is in awe of Amelia and considers her complaints groundless but her new caseworker, Joan Peeler, takes her words seriously. She can finally escape.

Astrid's fourth foster home seems like a dream come true. Her new foster parents are Ron and Claire Richards. Ron is a television producer and Claire is an actress. Claire takes genuine interest in her, which unsettles her at first, but she begins to blossom under her attention and encouragement. Astrid loves Claire but finds weaknesses in her foster mother. Claire is extremely insecure, especially when it comes to Ron, and unable to draw boundaries and stand up for herself. Astrid feels protective of Claire and watches over her. Unlike her previous foster mothers, Astrid has tried to keep Claire in the background from her mother. However, her mother finds ways to correspond directly with Claire, culminating in a visit at the prison. Ingrid manages to poison Claire's mind by insinuating that Ron is having an affair. She knows that Astrid loves Claire and she'd rather see her daughter in the worst kind of hell than have her happy with a weakling like Claire. Her mind poisoned by Ingrid, Claire becomes even more suspicious of Ron, further driving him away. It ends one day with Astrid discovering Claire dead from an overdose of sleeping pills. Ron, who has been unable to express how much he loved his wife, sobs in grief, and they comfort each other. Astrid no longer believes in the future.

As Astrid awaits her next placement at the infamous MacLaren Children's Center, she meets a kindred spirit named Paul Trout. She sees past his bad skin and finds beauty of soul. He asks to keep in touch as he leaves for his new placement. Astrid does several interviews with prospective foster parents. She meets a genuinely nice couple, Bill and Ann Greenway, but she's come too far to blend into their normalcy. Instead, she chooses Rena Grushenka's home as the place to wait out until her eighteenth birthday.

Rena Grushenka runs a thrift shop. She's a pragmatic woman whose primary interest is money. At her house, Astrid gets deeper into drugs and learns to help an expectant mother. About this time, her mother's followers and her lawyer visit Astrid. Apparently, there are people who believe her innocent and willing to fight for a retrial. Astrid drives a hard bargain with the lawyer who wants her to testify on her mother's behalf. When she sees her daughter again, Ingrid is shocked at the changes in Astrid. Gone are her tenderness and transparency, replaced by hardness. Breaking down from her usual pose, Ingrid performs a truly selfless act of maternal love. She is willing to give up her freedom to have her daughter of old back. She will tell her lawyer to leave Astrid alone. The truth exposed, they are reconciled at last.

Another three years have passed. Astrid now lives in Berlin with Paul Trout, who has become popular with European art students for his graphic novels. She and her mother write a couple of times a month, and she's even met her father, Klaus Anders. One day, she finds a headline trumpeting her mother's freedom. Ingrid has numerous offers, and Astrid can feel her beckoning back to the States. Paul wants to stay in Europe, but California will always call out to her.

More summaries and resources for teaching or studying White Oleander.