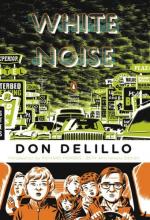 Don Delillo
This Study Guide consists of approximately 36 pages of chapter summaries, quotes, character analysis, themes, and more - everything you need to sharpen your knowledge of White Noise.

This detailed literature summary also contains Topics for Discussion and a Free Quiz on White Noise by Don Delillo.

This novel is the life story of a man named Jack Gladney or J.A.K. Gladney, as he is known around the College-on-the-Hill, where he is a professor. Jack specializes in Hitler studies, but is consumed with the idea of his own death. It follows him as he and his wife Babette deal with their own individual, inevitable, impending death.

The reader follows Jack's family as they encounter a variety of typical daily tasks, day to day. This is an extraordinary family. They are the result of many marriages and many children from these different relationships. The children, however, have come together as a single family of sorts under Jack and Babette.

The novel is broken up into three main sections. The first part follows the Gladney family as they perform average, daily activities, such as trips to the supermarket and dinner together. They lead an average, normal existence. The second part of the novel is the airborne disaster of Nyodene Derivative that invades their town and forces their evacuation. At this point, Jack, Babette and the children each face their individual mortality in unique ways. The third part of the novel resumes the Gladney family as they try to regain their normal life that they experienced before the disaster. This attempt proves to be nearly impossible for Jack and Babette. Whereas before the disaster, they worried about who would die first, now they both are obsessed with death and the imminent fear that accompanies their death.

The novel has a weak plotline, dealing more with the philosophical elements of life and death. The actual plot is more like a backdrop for Jack, Babette and the children to use as an impetus to discuss whatever is on their minds. All of the family members have a great deal of seemingly random knowledge that they have gleaned from the television, books, radio or other. They use this information to have conversations with each other that sound more like free association thinking than real communication between each family member.

The airborne disaster that changes their lives is a random accident that occurs on the train tracks outside of their home. None of the family members wants to accept that they will have to be evacuated, but they are all eventually routed off to another part of town. The next day, the seemingly random "dark billowing cloud" of Nyodene Derivative changes directions and they are once again evacuated from their "safe" spot. After the Nyodene Derivative is taken care of and the family returns home, all of the family members deal with the disaster in a variety of ways.

More summaries and resources for teaching or studying White Noise.