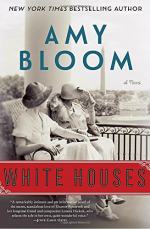 The novel opens on Eleanor Roosevelt's New York City apartment where her longtime friend and lover Lorena “Hick” Hickok has recently arrived to comfort the First Lady after the death of her husband, President Franklin Delano Roosevelt. Hick recalls the early years of their relationship, how she lived in the White House and vacationed with Eleanor in Vermont and Quebec. She recalls meeting Eleanor for the first time while working as a journalist and taking a train trip with her in which the two women shared memories from their respective childhoods. Eleanor grew up wealthy and attended boarding school, whereas Hick grew up in poverty in Bowdle, South Dakota where she was raped and abused by her father before being sent out to work as a maid at age 13. Hick then briefly traveled with a circus before moving to Chicago to live with her aunt and finishing school.

Hick receives a phone call from Eleanor's daughter Anna, who asks for help smoothing things over with her mother. Eleanor is angry because Anna invited one of Franklin's former lovers to his deathbed. Hick assures Anna that Eleanor will forgive her, because Eleanor is a kind and generous person. Hick recalls a party at the White House in 1941 in which Franklin's secretary and another of his former lovers, Missy LeHand, suffered a stroke. She was taken to her room to convalesce, and became increasingly distraught as Franklin failed to visit her. In a rage over Franklin's refusal to see her, Missy attempted to set fire to her room and was subsequently moved to her sister's house in Massachusetts. Consequently, while Hick respects Franklin for what he has done as president, she believes he is a callous man. When Missy died in 1944, Franklin failed to attend the funeral, sending along a condolence letter instead which praised her diligent work as a secretary and made no mention of their personal relationship. To some extent, Hick believes that Missy died of a broken heart from the way Franklin treated her.

Eleanor reads a letter from her cousin, Parker Fiske, who recalls Franklin and Eleanor's wedding day before going into detail about his tortured life as a closeted gay man. This causes Hick to recall a meeting she had with Fiske in 1934 in which he threatened to tell the world about Hick's relationship with Eleanor if she did not start supplying him with secret information about the goings-on at the White House. She refused to do so, but she was rattled by the conversation. Hick then recalls the day she broke up with Eleanor, having realized that Eleanor would never be able to leave Franklin, so their relationship was unsustainable. She recalls one of her earliest love affairs with an opera singer named Ernestine Schumann-Heink. She had met the singer in Milwaukee when she was a young journalist and the affair lasted only a few weeks. When Schumann-Heink moved away, she gave Hick a sapphire ring, which Hick gave to Eleanor many years later. The ring became a symbol of their love, and Hick delighted in seeing Eleanor wearing it in pictures in the newspaper.

Next, Hick recalls another meeting she had with Parker Fiske in which he told her that he was about to be outed as a gay man and begged her to ask Eleanor and Franklin to help save his job at the State Department. The Roosevelts did speak up for Fiske, but he was fired anyway, by the head of the FBI, J. Edgar Hoover. Hick recalls the last time she saw Franklin Delano Roosevelt shortly before his death, and how he had told her that she should not give up on her relationship with Eleanor, that they should be together forever. Suddenly, there is a knock on the door of Eleanor's apartment. Parker Fiske enters, beaten and bloodied, accompanied by his lover, a novelist named Thurmon Jones. Thurmon and Parker had been at a gay nightclub the night before when it was raided by police. They were charged with disorderly conduct and had their passports confiscated. Fiske once more asks for Eleanor's help getting out of this difficult situation, but she tells him there is nothing she can do for him. Hick encourages the two men to abscond to California. After Fiske and Jones leave, Hick and Eleanor lie in bed and Hick reminds Eleanor that she has many years left to live and can still make a difference in the world fighting for the progressive causes she holds dear.

The novel flashes forward to 1962. Hick, now an aging successful writer, is living on Long Island. Eleanor is hospitalized for complications from anemia and dies. Hick does not attend the funeral because she knows that Eleanor disapproved of public emotional displays, and she does not trust herself to remain calm. The reverend who delivered the eulogy at Eleanor's funeral visits Hick at home and brings her to Eleanor's grave. She sits on a bench nearby and speaks to Eleanor, while once more reflecting on their long and loving relationship, and how Eleanor was everything to her.