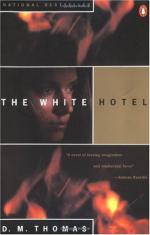 This detailed literature summary also contains Literary Precedents and a Free Quiz on The White Hotel by D. M. Thomas.

Frau Lisa Erdman, a young opera singer of Polish Catholic and Ukrainian Jewish descent living in Vienna, Austria, has been suffering from severe pain in her left breast and ovary for several years. When conventional doctors are unable to help her, she seeks the treatment of Professor Sigmund Freud, the father of psychoanalysis. Freud interviews her, gathering information about her past to try to understand what is ailing her in the present. He learns she suffers from intense, psychosexual hallucinations, and asks her to write something to explain what they are like. The result is Chapter 1 of The White Hotel, "Don Giovanni." It's so named, because it is written between the staves of the opera's score.

The poem is a vivid, outrageous tale of a young woman who meets a young soldier on a train and immediately has a sexual relationship with him. They stay together at the white hotel, a mystical and mysterious place where orange groves fall from the sky, and there are no consequences for the couple's actions. During the couple's time at the white hotel, four disasters kill nearly every guest: a flood, a fire, a landslide, and a cable car accident. While the couple is not involved in any of the incidents, they watch them all as they make love. Freud, struck but confused by "Don Giovanni," asks Lisa to write an analysis of her hallucinations. Instead, she gives him "The Gastein Journal," Chapter 2 of The White Hotel. The journal is a retelling of "Don Giovanni," though in a third-person, expanded form.

To share his experiences with Lisa with his colleagues, Freud writes a case study of her therapy, "Frau Anna G.," Chapter 3 of The White Hotel. In it, he details Lisa's life and therapy. When Lisa was a girl, her mother died in a hotel fire while on vacation. At 17, Lisa left her family home in Odessa, Ukraine, to attend ballet school in St. Petersburg. There, she had a relationship with a fiery young revolutionary named Alexei. Though she became pregnant with Alexei's child, he left her to pursue his politics and she miscarried the baby. After being kicked out of school, Lisa lived with her mentor, Madame Kedrova, but when Madame Kedrova got married, Lisa went to live with her mother's twin sister, Aunt Magda, in Vienna. In Vienna she became an opera singer and married a barrister, but her marriage failed and her career was cut short by her illness. Through therapy, Freud explores Lisa's childhood and tries to find a root to her pain and a reason behind her hysteria. He discovers that her hallucinations spring from sexual encounters, and declares Lisa bisexual. He also discovers her uncanny ability to sense when someone is going to die. After Lisa recalls a repressed memory of her mother and uncle having an affair and confirms that they died together in the fire, her pain subsides and she and Freud end her therapy.

Lisa's life after Freud is chronicled in Chapters 4 and 5 of The White Hotel. She returns to her opera career and is called to Milan, Italy, to fill in for the Ukrainian soprano Vera Serebryakova-Berenstein, who is injured. In Milan, Lisa befriends Vera and her husband, Victor, who sings the opera's male part. Though Lisa leaves the opera early, she leaves as a lifelong friend to Vera and Victor. Not long after, however, Vera dies in childbirth and Lisa's old friend Madame Kedrova dies of cancer. Lisa's pains return in full force. Not long after, she receives a letter from Freud asking for her permission to publish her writings along with his case study. This begins a correspondence in which Lisa reveals several lies she told Freud, including the true nature of her relationship with Alexei and her conflicts with her father. After Lisa tells Freud she disagrees with parts of his analysis, they stop writing to each other. Lisa feels better for awhile, having come to terms with her life and herself. One day, she receives a letter from Victor asking her to come to Kiev, Ukraine, to marry him and be mother to Vera's son, Kolya. Lisa eventually agrees, and for a while things go well.

About ten years after her marriage to Victor, Lisa is living in a slum with Kolya and Victor has been taken in the night by the government. A sign appears in the city one day instructing all the city's Jews to meet at the Jewish cemetery the next morning, and Lisa and Kolya pack and follow the orders. As they and the crowd move slowly down the street, they are unsure where they are going. One rumor says they are being shipped to a ghetto, while another says the Germans are evacuating them to Palestine, to the Holy Land. As Lisa and Kolya near the enclosure where they are supposedly to board a train, Lisa realizes there is something else going on. They are herded into the enclosure, beaten, and stripped naked. Lisa manages to get herself and Kolya freed for a while, because she has a Ukrainian identification card. Unfortunately, their liberation is short-lived. Like thousands of other Jews, Lisa and Kolya are murdered at the Babi Yar ravine. The final chapter of The White Hotel follows Lisa in the afterlife. The white hotel reappears, now a camp for immigrants to the Holy Land. Lisa meets her mother and reunites with Alexei and Vera. Though things are not perfect in this land and there are thousands of new immigrants overwhelming it, Lisa finds herself finally truly happy.