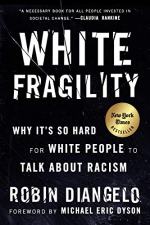 Robin DiAngelo
This Study Guide consists of approximately 46 pages of chapter summaries, quotes, character analysis, themes, and more - everything you need to sharpen your knowledge of White Fragility.

The following version of this book was used to create the guide: DiAngelo, Robin. White Fragility. Beacon Press, 2018.

The author, an academic who has been involved in anti-racism training, writes about the ways in which whites absolve themselves from improving racism in our society by using defensive strategies that allow them to maintain the status quo. These strategies include statements, beliefs, and assumptions that the author groups under the term "white fragility." She shows the reader what these assumptions are and how to change these assumptions to tackle racism more effectively.

DiAngelo begins her narrative with an analysis of the racist nature of our society and the way in which race affects us all, and she informs the white reader that the reader is racist by definition because our society is so permeated by race. DiAngelo notes that we live in a segregated society in which whites and people of color rarely have the chance to engage in honest conversations and to get to know each other well. She then delves into the ways in which whites try to protect themselves from engaging in anti-racism work by claiming that they are objective or that they see everyone as individuals. DiAngelo debunks the idea that these defenses are feasible in American society, as people are not just individuals but are part of larger groups that are affected by racism and the forces of white supremacy. The author goes on to expose other fallacies that protect whites and that serve white fragility, such as the good/bad binary idea. This is the idea that one is either a foaming-in-the-mouth racist who commits violent racist actions or is a benevolent non-racist white person. Whites are actually not divided by this binary. The author shows that racism has acquired a more subtle, insidious nature in today's world and that whites often make racist remarks in the company of other whites but not in front of people of color. Whites also use coded language that the author refers to as aversive racism, in which they obliquely refer to racist ideas in what they say (an example is that whites must live in all-white neighborhoods to attend good schools). As a result, whites reinforce their sense of white solidarity, and their brittleness about confronting racism allows the power structure that enforces racism to continue undiminished.

The author includes actual remarks and behaviors of whites undergoing anti-racism training to show the ways that they use anger, fear, remove, intellectualization, and other defenses to avoid doing the work of ameliorating racism. She reserves a special section for white women, whose tears serve to draw attention away from the work of reducing racism and which reinforce the stereotype of white women as damsels in distress who need the protection of men. She concludes with ideas about how whites can approach conversations and feedback about race in a less defensive way and the ways in which whites can learn more about race. Throughout the narrative, she is honest about her own biases and shortcomings, and she shares her personal experiences confronting race with the reader.

More summaries and resources for teaching or studying White Fragility.