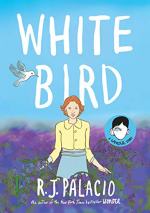 R. J. Palacio
This Study Guide consists of approximately 31 pages of chapter summaries, quotes, character analysis, themes, and more - everything you need to sharpen your knowledge of White Bird.

Sara Blum is referred to as Grandmere in the Epilogue and Prologue. She had a happy childhood, but her life changed once the Germans occupied France. Then anti-Semitism became more common. Eventually, she had to go into hiding. The Beaumier family cared for her.

She describes her experiences to her grandson, Julian. Before the Nazis occupied France, she had ignored a boy named Tourteau at school. However, when she needed help, Tourteau brought her to his family's barn, and she learned his actual name: Julien. Gradually, over the years, they fell in love.

Sara reminds her grandson that kindness is not forgotten. She also says that Julian's generation needs to stand up against hatred so that what happened in the Holocaust--the murder of six million Jewish people--will not happen again.

Julien was a friend to Sara: When she was not safe, he showed her the...

More summaries and resources for teaching or studying White Bird: A Wonder Story.