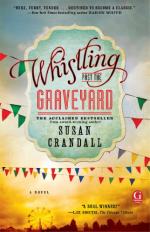 Susan Crandall
This Study Guide consists of approximately 41 pages of chapter summaries, quotes, character analysis, themes, and more - everything you need to sharpen your knowledge of Whistling Past the Graveyard.

Whistling Past the Graveyard Summary & Study Guide includes comprehensive information and analysis to help you understand the book. This study guide contains the following sections:

This detailed literature summary also contains Quotes and a Free Quiz on Whistling Past the Graveyard by Susan Crandall.

“Whistling Past the Graveyard” is an historical novel by Susan Crandall which follows the July 1963 journey of 9-year-old Starla Claudelle as she attempts to find her mother in Nashville with the help of Eula, a black woman who is traveling with a white baby named James. When the novel begins, Starla lives in Cayuga Springs, Mississippi, with her grandmother. Her father works on an oil rig out in the Gulf, while her mother has gone to Nashville to become a famous singer. This does not sit well with Grandma. Grandma is very strict, and will ground or smack Starla for the smallest errors. Starla, however, is doing everything she can to stay on her best behavior so she can see the fireworks on July Fourth. When she sees Jimmy Sellers picking on Priscilla Panichelli, she punches Jimmy in the face and breaks his nose.

Grounded from seeing the fireworks, Starla sneaks out anyways. She is caught by Jimmy’s mother, who attempts to force Starla into her car to bring her to Grandma. Starla pushes Mrs. Sellers and runs. Mrs. Sellers declares that Starla will certainly go to reform school, causing Stella to decide to run away from home to find her mother in Nashville. Outside of town, Starla is picked up by a black woman named Eula, traveling home with a white baby named James. Eula explains she found James on the church steps, so she is taking James in. Eula offers Starla dinner, and says her husband, Wallace, can help get Starla to Nashville.

Wallace, a physically abusive alcoholic, is terrified and enraged that Eula has brought home a white girl and a white baby without permission from their parents. Wallace attempts to strangle Starla, but Eula kills Wallace by hitting him over the head with a cast iron skillet. Eula is heartbroken, and seeks to make it up to Starla. Starla requests that Eula bring her to Nashville. Eula agrees. She, Starla, and Baby James set out the next morning. Not long into the trip, an angry and racist white drive rear-ends Eula’s truck, causing them to go into a ditch. A friendly white farmer comes along and helps pull the truck out of the ditch. He tells them to be careful because racial tensions are high with the civil rights movement in full swing.

Starla, Eula, and Baby James are forced to spend the night in their truck when it breaks down not long after. Starla comes down with a fever. None of the local farmers—all black—want to help a white girl. In the nearby town, a black woman named Miss Cyrena readily takes in Starla, Eula, and baby James. She cares for them for two weeks while Starla recovers and Eula earns money by baking goods for local eateries and residents. When local racists zero in on Eula, Cyrena puts Starla, Eula, and James on a bus bound for Nashville. Starla is horrified that the bus is segregated, and that most of the places the bus stops at are either segregated, or refuse to serve blacks at all.

In Nashville, Starla’s mother, Lulu, is enraged to see Starla. She tells Starla everyone has been looking for her for two weeks, and that she has caused a lot of trouble. She smacks Starla across the face and calls Starla’s father to come pick Starla up. It turns out her mother is remarried, is an alcoholic, and is not a good person. Starla’s father drives up right away, and readily agrees to bring Eula and James back. Starla, heartbroken over her mother’s reaction and grateful that her father was happy to see her, confesses the truth of everything to him.

Back home, it is revealed that James is the illegitimate son of the older sister of Starla’s best friend, and that charges won’t be filed against Eula for killing Wallace since it was done in self-defense. The local sheriff explains that it is one less black man to deal with, and that he won’t have to drag a white family through court by not pressing charges. Starla’s father explains the sick irony that they should be thankful for once that the life of a black man is considered less than a white man’s because it has saved Eula. Baby James will be put up for adoption. Starla’s father takes a local job and rents an apartment for him and Starla in elderly Mrs. White’s large old house. Mrs. White hires Eula to work for her, and gets very close with her, Starla, and Starla’s father. Eula comes to consider them all family. As the novel ends, they have Thanksgiving dinner with Cyrena.

More summaries and resources for teaching or studying Whistling Past the Graveyard.

Whistling Past the Graveyard from BookRags. (c)2022 BookRags, Inc. All rights reserved.