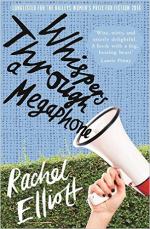 Rachel Elliott
This Study Guide consists of approximately 52 pages of chapter summaries, quotes, character analysis, themes, and more - everything you need to sharpen your knowledge of Whispers Through a Megaphone.

Whispers Through a Megaphone Summary & Study Guide includes comprehensive information and analysis to help you understand the book. This study guide contains the following sections:

This detailed literature summary also contains Quotes and a Free Quiz on Whispers Through a Megaphone by Rachel Elliott.

The following version of this book was used to create this study guide: Elliott, Rachel. Whispers Through a Megaphone. London: Pushkin Press, 2015.

The novel Whispers Though a Megaphone, by Rachel Elliott, explores the journeys of three main characters. They are searching for meaning in their lives at crucial turning points. Three years ago after an attack, Miriam Delaney had clawed her attacker’s eyes. She has locked herself inside her home because she is afraid of what she might do to someone now. At the beginning of the novel, Miriam knows she must venture out of her home, develop meaningful relationships with people, and confront the things that frighten her. She is making a plan for herself with the help of her one friend, Fenella.

When Miriam finally leaves her house and sees a movie, she decides to take a walk to the forest area not far from her home. There, she meets Ralph, a married man who has fled his home and has ended up outside a shack in the woods with his guitar and some snacks. Ralph, a successful psychotherapist and married father of teenage twin boys, has had a fight with his wife Sadie on his birthday. When he finds out through a patient that Sadie has eyes for her friend Kristin and has posted this information on Twitter, he becomes enraged. He wonders why Sadie is so cold to him, yet so willing to be transparent to the rest of the world. When their fight inadvertently leads to Ralph hitting Sadie, he leaves for the woods.

Upon their meeting, Miriam is at first frightened. After all, this very same forest is the scene of her attack three years prior. Ralph turns out to be a good listener. He proves his noble intentions and listens as Miriam opens up about her painful childhood, all told of course, in a whisper. Without judgment, Ralph listens as Miriam recounts her mother showing up to work naked, sleeping with the headmaster, shutting down Miriam’s letter writing with her grandmother, and not allowing Miriam to read books or listen to music.

Frances, Miriam’s mother, brought Miriam up in the throes of one lie after another. Miriam tried hard to be obedient, not to make waves, and even stopped speaking in a regular voice when her mother made her believe that the world had no interest in hearing anything Miriam might want to say. Frances lied to her about her grandmother, saying that she was not interested in Miriam anymore. Frances told Miriam that her father died of an aneurysm when Miriam was a baby. In fact, Eric Delaney lived 12 miles away. However, Miriam, who could no longer interpret fact from fiction, always believed Frances. Miriam did not have any other choice.

Meanwhile, Sadie Swoon, Ralph’s wife, is having a crisis of her own. Beside the fight with Ralph, Sadie acts on her feelings for her best friend Kristin. After a party, Sadie unexpectedly kisses Kristin, who already has a life partner. Sadie’s forwardness appalls Kristin. Confused and lonely, Sadie turns to the woman for whom she has always had feelings, a college friend named Alison Grabowski. Without advance warning, Sadie shows up at Alison’s work. After some small talk, Alison agrees to see her, even though she, too, is in a committed relationship. There is clear interest, and the two spend a lot of time together. Meanwhile, Ralph is staying at Miriam’s house, though their relationship remains platonic and one of a supportive friend.

As Miriam begins to branch out in her life, things take shape for her. She meets Matthew Delaney, her half-brother and the mysterious postcard messenger who had left her advice in her mailbox. The friendship that develops between them is supportive. Matthew is the lynch pin, bringing Miriam into his family and introducing her to their father, Eric. Miriam also learns to accept that people like her and value her for who she is. She ends up seeing her neighbor Boo, who falls for her well before she ventures out. Her life by the end of the novel is full, and she works as a gardener with her friend Ralph. Though she still speaks in a whisper, Miriam has learned to love and to accept love.

Ralph’s journey does not have the perfect ending. At the end of the novel, he is still on his path to finding his true self. In his search, he seeks out his long lost “love,” Julie Parsley. Ralph quickly learns that he is in love with the idea of her as she was when they were young. However, Sadie is still the one he wants. Sadie is unfulfilled with Ralph. She ends up pursuing a plan of living life with Alison, though this is clear in the story. Ralph quits his psychotherapy practice, which was Sadie’s source of pride, not his. He returns to the work that truly makes him happy - gardening. The fact that he is able to make this change in his life speaks to the hope that he will find someone who will love him for who he is, and not for what she wishes that he could be.

More summaries and resources for teaching or studying Whispers Through a Megaphone.

Whispers Through a Megaphone from BookRags. (c)2022 BookRags, Inc. All rights reserved.