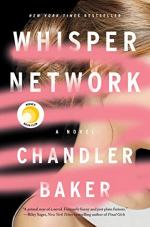 The following version of this book was used to create this study guide: Baker, Chandler. Whisper Network. Flatiron Books, 2019.

The collective voices of women narrate Whisper Network. Throughout the novel, Baker includes deposition and interview transcripts related to an investigation that the narrator claims could have been prevented if anybody had listened to them. At the beginning, Ardie Valdez and Grace Stanton, both lawyers who work at Truviv, discussed the sudden death of their CEO, Desmond Bankhole. Their friend and supervisor, Sloane Glover, arrived late at work after a meeting at her daughter Abigail’s school. Sloane and Ames Garrett, the division’s boss who was next in line to become CEO, led a meeting about how to handle Desmond’s death in the press. Ames told Sloane that he had hired Katherine Bell to work in her division. Ever since they had an affair 12 years ago, Sloane felt that Ames did not respect her in the office. Grace heard about the Beware of Assholes in Dallas Men List, or BAD Men List, which was circulating around the office with a list of men who had sexually harassed women in the workplace. Sloane acquired this list from her friend, Elizabeth Moretti.

Grace was having a difficult time adjusting to being a new mother. She decided to take a night off and booked a night at a hotel. In the morning, she ran into Katherine at the hotel, who claimed that a friend had put her up in the room. Sloane met with Abigail’s principal about the boys in her class who were bullying Abigail. She asked Ardie to be her legal representation. Later, after noticing Ames paying special attention to Katherine, Sloane confronted Ames about leaving Katherine alone. He asked Sloane to help him get promoted to CEO. Sloane recalled the end to their relationship, when Ames had tried to make a move on her after she broke up with him.

Ames saw Grace while she was upset about spilling her breast milk. He offered to smoke with her on the balcony. He told her about how his wife Bobbi had had postpartum depression. Grace saw that he had a key card to the same hotel she and Katherine had stayed at. Later, Rosalita walked in on Ames and Katherine in his office. After seeing mean messages on Abigail’s phone, Sloane wrote a legal memo to Abigail’s school and signed it as Ardie. Ardie invited Rosalita, Katherine, Grace, and Sloane to her son Michael’s birthday party. They got buzzed from drinking. Katherine told them how she was fired from her previous job. Ardie and Sloane argued about Ardie’s ex-husband.

Sloane and Ardie made up after their argument at the party. Sloane added Ames’ name to the BAD Men List. Ames pressured Grace to write a letter of recommendation for him to be promoted to CEO. Katherine told the women that Ames had come onto her one night in the office. Sloane told her husband Derek about her affair with Ames. She also decided to sue Ames and Truviv for sexual harassment, with Ardie and Grace’s support.

Sloane was notified at work that Ames had jumped off the building. She assumed that it was a suicide, but the detectives claimed that somebody might have pushed him. They began interviewing people in the office. Meanwhile, Sloane’s old friend Cosette Sharpe was representing Truviv in Sloane’s sexual harassment case against the company. The women asked Katherine to come forward with her story about Ames harassing her. Instead, Katherine told Cosette that Ames had never harassed her and Sloane and Ardie has a personal vendetta against him. Truviv sued Sloane, Ardie, and Grace for wrongful death. They hired a lawyer for themselves. Grace told the detectives that Katherine was lying.

After many long days of depositions, their lawyer encouraged the women to settle, lose their jobs, and pay Truviv five million dollars. Sloane visited Abigail’s school after Abigail punched a boy in her class who was bullying her. She defended her daughter. Sloane and Grace met with Cosette to sign the settlement papers with Truviv. However, instead of signing the papers, Ardie and Rosalita arrived with Rosalita’s son Salomon, who was also Ames’ son. Ames had assaulted Rosalita eight years ago. Afterward, Ardie asked Katherine about why she had lied. Ardie, Sloane, Grace, and Rosalita received a huge settlement from Truviv. Ardie, Sloane, and Grace left their jobs and planned to start their own law practice together. Grace admitted that she had postpartum depression. Ardie said that Ames had raped her years ago. Grace thought that she had killed Ames, but Ardie revealed that she had been there when Katherine pushed him off the balcony.