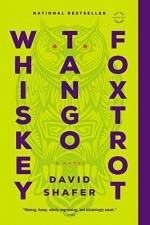 David Shafer
This Study Guide consists of approximately 44 pages of chapter summaries, quotes, character analysis, themes, and more - everything you need to sharpen your knowledge of Whiskey Tango Foxtrot.

NOTE: Due to the nature and structure of this novel, quotes and references to the text are attributed by page number. This study guide specifically refers to the May 2015 First Mulholland Books paperback edition.

“Whiskey Tango Foxtrot” is a contemporary dystopian novel by David Shafer in which three young adults seek to stop a shadow group known as The Committee from monopolizing control of the world’s information to bring about a new world order. When the novel begins, 30-something Leila works for an NGO seeking to bring about a better life for the citizens of Myanmar. Having fled the tyranny of Iran with her family, Leila is now a proud American citizen. While in Myanmar, she stumbles across a strange jungle operation where two white security contractors provide protection for a computer programmer. She sends out a mass e-mail to all of her contacts asking for more information about it. Within hours, her visa has been revoked and she is to be sent home. She also learns that her father, a principal, has been arrested for having child pornography on his school computer.

In Portland, Oregon, 30-something Leo Crane, heir to a family company fortune, cruises unsteadily through life, never holding down a steady job, and drinking and doing drugs frequently. He wonders how people find purpose and meaning in their lives, and wonders how anyone could ever believe in an idea bigger than themselves. Meanwhile, Leo’s old college friend, Mark Deveraux, has found himself at the pinnacle of success as a business and self-help guru who is largely a fraud. Mark has lifted most of his book and self-help material from Leo’s obscure blog, which apart from its conspiracy theories is full of some deep thoughts about life and the world. Mark, who once worked in a middle-level job at SineCo, has now become the company’s most celebrated member and the face of the company at the urging of CEO James Straw.

As Leila travels home, she is diverted to Dublin where she encounters a secret group known as Dear Diary, who are opposed to the actions of the Committee – a secret cabal of leaders, businessmen, and other powerful figures who control vast resources and wealth. The Committee is led by James Straw and SineCo, who have been putting together a new project called New Alexandria. New Alexandria, as Straw explains to Mark, is designed to gather all of the information in the world together – from transcripts of every telephone call ever made to the hopes and dreams of people – in one place under the Implied Consent Decree of 2001. All of this information is to be stored, protected, and accessible only to those who have paid a fee. Mark is to be the face of this project, selling it to the public at large. Mark is worried about this, and is given time to think about taking the job. What Mark does not know is that the Committee will manufacture a catastrophe in which all the data of the world will be destroyed – except for the data of New Alexandria. This will, in turn, lead to the salvation of some and the genocide of others.

Leila is assigned to get to Mark through Leo because of their history, and because Leo has already essentially figured out the Committee’s plot on his blog. Leo ultimately agrees to help, and arranges a meeting with Mark. Mark, who has already been having moral reservations about SineCo’s operations, willingly agrees to help Dear Diary put down the Committee. Mark is assigned to implant a computer virus into the system aboard Straw’s data collection ship. Mark arranges a meeting with Straw, saying he will accept the job, but in reality, intends to plant the virus. As the novel ends, Mark is waiting to board the ship, and knows that he very well may not be alive much longer.