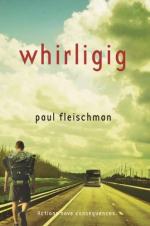 Paul Fleischman
This Study Guide consists of approximately 61 pages of chapter summaries, quotes, character analysis, themes, and more - everything you need to sharpen your knowledge of Whirligig.

Whirligig demonstrates graphically how actions, good and bad, large or small, spin on and on in never ending circles of consequence, like concentric circles moving outward from a pebble dropped in the water.

Sixteen-year-old Brent Bishop, junior at Montfort, a private high school in Chicago, searches for self and acceptance by his peers in the right clothes, the right car, the right school, enough money, alcohol, and the right girl friend. His journey takes him to a party with a friend who neglected to tell him it was a Chess-themed party and everyone was to dress in all white or all black.

"He is always the new kid, stumbling through the maze, never quite rich or goodlooking or athletic enough to join the elite.

Unless he plays his cards right at the party tonight."

Frequent moves, as his father move up the corporate ladder, intensify Brent's feelings of isolation and insecurity and push him into unwise decisions. Both alcohol and pot are available at the party and Brent, "proud of the fact that he could hold hard liquor," drinks. When he is verbally "slapped in the face" by Brianna, the one girl he wants to impress, he loses control, swings a fist at his host, and leaves the party in humiliation and despair. He goes on the wrong expressway with no idea how to get home, and he wallows in self-pity. Reason flees and the humiliation he anticipates from classmates on Monday morning cloud his thinking. Deciding on suicide, he takes his hands from the wheel of his car. Instead of ending his own life, he ends the life of eighteen-year-old Lea Zamora. She was a "senior at Niles North High School, an honor student, member of the student council, the orchestra, the track team, active in the Filipino community, volunteer at Resurrection Hospital. Why did he have to kill someone like that?"

His driver's license is confiscated at the scene of the accident, and at a hearing, the judge sentences him to probation in a detention center. Brent feels relief, then dissatisfaction, with the judge's ruling. He realizes he wanted a punishment. When he is able to meet with Mrs. Zamora "to apologize, and to understand, and to atone," she tells him she does not believe in retribution.

She tells him about Lea and her love for life, how she loved to make people laugh, and her love for whirligigs. Mrs. Zamora requests, "that [he] make four whirligigs, of a girl that looks like Lea. Put her name on them. Then set them up in Washington, California, Florida, and Maine—the corners of the United States. Let people all over the country receive joy from her even though she's gone. You make the smiles that she would have made. It's the only thing you can do for me. That's what I ask."

Mrs. Zamora supplies a Greyhound bus pass, good for forty-five days. Over the objections of his parents, Brent consents to fulfill the request and with plywood pieces, new tools, an old book about building whirligigs, and some camping equipment in his backpack, he sets out for Washington.

He travels to each of the states stipulated by Mrs. Zamora where he fashions whirligigs, each one more complex than the last one, using the patterns he chooses from the book.

During his journey, Brent's self-esteem grows. He learns how to enjoy simple pleasures. A new interest in reading develops and he finds he enjoys learning new things.

He finds a new connectedness to creation, loses his feelings of isolation, and gains a sense of his own worth. He changes from a self-centered, rather unlikeable young man, into a more mature and likeable young man.

Alternating chapters flash forward, in a reverse chronology, to stories within the story about the profound effects the whirligigs have on the lives of others who encounter the whirligigs. They are a too-studious eighth-grader in Maine and her best friend, an immigrant from Puerto Rico sweeping streets in Miami, Florida, an adopted Korean boy in Washington, and a dying grandmother and her teenage granddaughter in San Diego, California.

When Brent completes the final whirligig and installs it at the home of an artist in Maine, he feels a sense of change, as if he is oddly buoyant. "The guilt hasn't magically vanished overnight. Four whirligigs wouldn't accomplish that." He does feel ready to return to Chicago and his parents, deliver the photos to Lea's mother, and start in a new school in the fall. "He felt that he was up to it."

More summaries and resources for teaching or studying Whirligig.