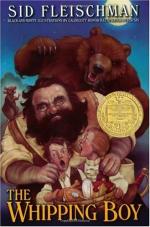 The exact time and place are not specified in The Whipping Boy. The story takes place during an era of powdered wigs and highwaymen, by inference the latter half of the eighteenth century. The action moves from the royal castle to the countryside. Two boys, Jemmy and Prince Horace (known throughout the kingdom as Prince Brat), are taken captive by highwaymen and brought to a squalid hut in a forest. After escaping they return to the city along with a potato man who hopes to sell his wares at a fair. From there, with the two cutthroats in close pursuit, they take refuge in the city sewers. The story ends as they return to the royal castle to face the king.