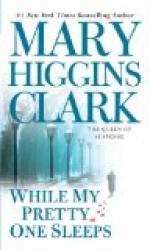 While My Pretty One Sleeps Summary & Study Guide

Mary Higgins Clark
This Study Guide consists of approximately 45 pages of chapter summaries, quotes, character analysis, themes, and more - everything you need to sharpen your knowledge of While My Pretty One Sleeps.

While My Pretty One Sleeps Summary & Study Guide Description

While My Pretty One Sleeps Summary & Study Guide includes comprehensive information and analysis to help you understand the book. This study guide contains the following sections:

This detailed literature summary also contains Topics for Discussion on While My Pretty One Sleeps by Mary Higgins Clark.

A suit paired with the wrong blouse becomes a major clue in the murder of writer Ethel Lambston in the Mary Higgins Clark novel "While My Pretty One Sleeps". It is fashion designer Neeve Kearny who first feels Ethel's disappearance is suspicious. As she and her retired police commissioner father try to solve the crime, it is discovered that Neeve is also in danger of being killed. With the help of his new friend Kitty Conway, Miles is finally able to put the pieces of the mystery together in time to save his daughter. By solving the murder of Ethel Lambston, police also discover the same person had murdered Renata Kearny, Neeve's mother and Myles' wife, nearly twenty years ago.

Neeve becomes suspicious that something has happened to Ethel when her long-time customer cannot be found when it is time to deliver her latest purchase of clothing. She goes to Ethel's apartment to find that Ethel's hateful nephew, Douglas Brown, has taken up residence there. Douglas, who claims to have no knowledge of Ethel's location, quickly becomes a suspect in the crime once Ethel's body is located. Another suspect is Seamus Lambston, Ethel's ex-husband. Seamus has been paying Ethel one thousand dollars in alimony since their divorce. The two had a horrible fight about the alimony where Seamus punched Ethel the day before she disappeared.

Another suspect in the case is Gordon Steuber, a fashion designer who has recently gotten in trouble for running sweatshops and tax evasion. He is also arrested for importing drugs in the linings of his clothes, a crime it is suspected Ethel became aware of. It is believed that Steuber also takes out a hit on Neeve. It is Neeve who realizes that Ethel would not have worn the blouse with the suit she is wearing when her body is found. She also realizes that Seamus Lambston, who seems to be the favorite in Ethel's murder, would not have known how to put Ethel's outfit together at all.

It is not until Neeve is face to face with her would be killer that she finally puts together all of the pieces. She realizes the man she has known as "Uncle Sal" her entire life is the same man who killed her mother over ownership of a fashion design. Now, Sal plans to kill her to keep her from figuring out and telling what she knows about Ethel's murder. He has also killed Ethel because she learned that he had stolen the Pacific Reef design from Renata. Myles is able to step in just in time to save his daughter from the man whom he believed was his friend.

More summaries and resources for teaching or studying While My Pretty One Sleeps.

While My Pretty One Sleeps from Gale. ©2005-2006 Thomson Gale, a part of the Thomson Corporation. All rights reserved.