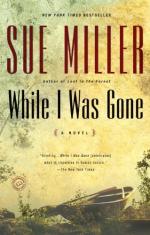 While I Was Gone - Chapter 11 Summary & Analysis

Sue Miller
This Study Guide consists of approximately 35 pages of chapter summaries, quotes, character analysis, themes, and more - everything you need to sharpen your knowledge of While I Was Gone.

Jo tells Daniel that she plans to meet a female friend, but in reality she plans to meet Eli in Boston. They meet at bar at the Ritz Hotel, and as Eli talks about his job Jo finds she is getting aroused. That feeling ends when Eli asks to talk about Dana.

Eli says that he and Dana had a sexual relationship, a detail that Jo already knew, but she is surprised when he says that he was in love with her. He tells Jo that Dana was the reason he moved into the group house, and he tells her how their relationship began.