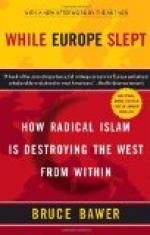 This detailed literature summary also contains Topics for Discussion and a Free Quiz on While Europe Slept by Bruce Bawer.

While Europe Slept is an intense book about how radical Islam is taking over Western Europe. The first part of the book is about the European thought before the September 11th attacks on the World Trade Center in New York City. Bawer moved to the Netherlands because he wanted to get away from the materialism of the United States. He wanted to experience new things, be part of the "civilized" and somewhat "superior" culture that was Europe, so he settled in the Netherlands. He was happy for a while, until he moved close to a Muslim enclave in Amsterdam and realized how ugly the suburbs of the famous city were and how segregated the people were from each other. This opened his eyes to the vast use and abuse of this very liberal city, and the most generous welfare nation in the world. This, his book, continues with his evaluation on this abuse and how it is going to be the death of the modern Europe that everyone knows if the European establishment does nothing to stop the invasion.

The second part of the book is about the post 9/11 world and how people thought about the U.S. after the attacks. Most Europeans thought that the attacks were well deserved, and that as Europeans they were distanced from the attacks. They believed it was an American problem and treated it mostly like a natural disaster instead of a war tactic. They sympathized with the terrorists, said they were standing up for their rights from being invaded by Israel and the U.S. consumption of oil. The civilized Europeans believed they could talk anything out, fix any problem with dialogue and that the U.S. needed to stop acting so barbaric in waging wars so easily. The European establishment condoned the invasion of Afghanistan and the invasion of Iraq. The main U.S. supporters were those from the Eastern European nations that still remembered being controlled by the Soviet Union and who knew the price of freedom. However, the post 9/11 scene only brought back good memories of the Soviets to those in Western Europe. They knew that Communism was built on strong moral values of equality and reminisced of the time when the world was balanced. They romanticized the Soviets, held them with dear nostalgia, and said it was a better world then, despite the fact that the Soviets wanted to take over all of Europe and condemn them to the fallacies of communist equity.

The third part of the book talks about Europe's all-out liberal resistance and how the radical Islamists were actively taking over. Children as young as five were acting out towards Christians, Jews, and other non-Muslims in the streets. They fought against practical school lessons like right angles and basic history. Jews were getting attacked on a daily basis, and school officials didn't do anything about the attacks. Journalists who dared speak against Muslim extremists were ostracized for voicing their opinions, for voicing the truth they had discovered. Bills were even proposed in some European nations to make it illegal to even talk badly about Islam to ensure that people didn't disturb the peace. Peace was the ultimate goal of Europe, but the peace they were living in was really just walking on eggshells to make sure they didn't wake the beast of radical Islam, which had laid its eggs in their country and would eat them at a moments notice. They sacrificed their freedoms, and would sacrifice their Jews again if only to keep the peace. Europe needs to wake up and fight to get control of their lives back. They have fought historically for centuries, and it is a shame that they would want to give up now.