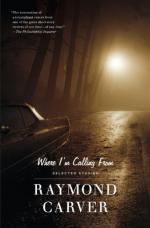 Where I'm Calling From Characters

Raymond Carver
This Study Guide consists of approximately 51 pages of chapter summaries, quotes, character analysis, themes, and more - everything you need to sharpen your knowledge of Where I'm Calling From.

Frank Martin is the proprietor of a residential treatment facility for alcoholics. A short, heavy-set, cigar-smoking man, he advises his patients to consider the example of Jack London, the famous writer who died of alcoholism. His rather "macho" approach seems simplistic in the context of the complex human problems J.P. and the narrator have been discussing.

The unnamed narrator of the story is an alcoholic, probably in his late thirties or early forties, who has checked into a residential treatment facility for the second time. He is estranged from his wIfe and seems unable to cope with the news that his girlfriend may have cancer. Sitting on the facility's front porch, the narrator listens to a fellow patient named J.P. describe his own turbulent marriage. The narrator seems genuinely touched by J.P. and by his wife, Roxy, when she comes to visit. Seeing...

More summaries and resources for teaching or studying Where I'm Calling From.

Where I'm Calling From from Gale. ©2005-2006 Thomson Gale, a part of the Thomson Corporation. All rights reserved.