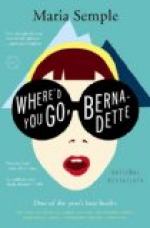 Related Topics
Today Will Be Different

Maria Semple
This Study Guide consists of approximately 32 pages of chapter summaries, quotes, character analysis, themes, and more - everything you need to sharpen your knowledge of Where'd You Go, Bernadette: A Novel.

This detailed literature summary also contains Topics for Discussion on Where'd You Go, Bernadette: A Novel by Maria Semple.

"Where'd You Go Bernadette" is a novel by author Maria Semple. The story follows the main character, Bee Branch, as she pieces together emails, letters and other documents to try to find her mother, Bernadette Fox, who has gone missing. Bee Branch is the daughter of an executive at Microsoft and her mother is a former award-winning architect. Although her mother seems strange and crazy to the other private school mothers and her father's employees, Bee knows that her mother has always been there for her, and that Bernadette simply walks to the beat of her own drum.

When Bernadette escapes in the middle of her intervention, nobody knows what happened to Bernadette or where she went. After her father ends up impregnating his administrative assistant, Soo-Lin Lee-Segal, word comes from the credit card company that Bernadette made charges aboard the ship the family was supposed to take for their trip to Antarctica. Soo-Lin and Elgin, Bee's father, meet the ship in port in South America, but Bernadette manages to escape again and doesn't emerge from the ship with the rest of the passengers.

After Bee doesn't thrive while away at boarding school, Elgin agrees to use their tickets to Antarctica. Elgin sees it as a way for Bee to have closure about her mom. Bee sees it as a way to act as an amateur detective to find her mom. Bee, with the help of her father, tracks her mother down and they all agree to make the changes necessary for them to live a happy and healthy life together.

More summaries and resources for teaching or studying Where'd You Go, Bernadette: A Novel.

Where'd You Go, Bernadette: A Novel from Gale. ©2005-2006 Thomson Gale, a part of the Thomson Corporation. All rights reserved.