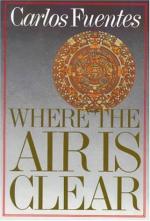 Introduction & Overview of Where the Air Is Clear

Where the Air Is Clear Summary & Study Guide Description

Where the Air Is Clear Summary & Study Guide includes comprehensive information and analysis to help you understand the book. This study guide contains the following sections:

This detailed literature summary also contains Bibliography and a Free Quiz on Where the Air Is Clear by Carlos Fuentes.

The publication of Carlos Fuentes's debut novel in 1958 created much controversy with its critical and loosely Marxist look at the social strata and history of Mexico City. Where the Air Is Clear deals with the issues of Mexican identity and need for selfknowledge, and paints a society torn between its ancient mythology and the contemporary modernity, severely shattered on social, political, economic, and spiritual levels. The novel, often called one of the primary works of the magic realism tradition, also established Fuentes as Mexico's leading contemporary novelist and one of the founders of "El Boom" in Latin American literature.

The thorough blend of myth, history, and modernity in the novel, as in Fuentes's other works, signifies the author's search for the viable identity of his country which would encompass its ancient roots as well as its present society. The characters of Where the Air Is Clear present diverse personal experiences as affected by the Mexican Revolution of 1910. From Ixca Cienfuegos, a mysterious embodiment of the Aztec war god, to Federico Robles, a revolutionary turned business tycoon who rejects his Indian heritage, Fuentes examines Mexican history and society through his characters whose names and individual memories comprise the novel's chapters. Vacillating perspectives and montage-like sections compose Fuentes's experimental narrative style, giving it a surreal tone and enabling him to present the vast and self-contrasting spectrum of personal memoirs and lifestyles in Mexico City. The frag mentary nature of his fiction reflects the author's vision of his country; Fuentes told John P. Dwyer in an interview, "our political life is fragmented, our history shot through with failure, but our cultural tradition is rich, and I think the time is coming when we will have to look at our faces, our own past."