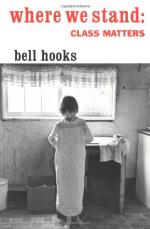 Where We Stand: Class Matters Topics for Discussion

Bell hooks
This Study Guide consists of approximately 25 pages of chapter summaries, quotes, character analysis, themes, and more - everything you need to sharpen your knowledge of Where We Stand.

What was Bell's childhood like? How can Bell's grandmother, Baba, be characterized? What influence did she have on Bell?

What were Bell's parents' views on money and luxuries? How did Bell's mother convince her that she didn't really want the yellow dress she asked for? What lingering effect did this kind of manipulation have on Bell?

What was "resource sharing," which was practiced in Bell's community during her childhood? How does that relate to the redistribution of wealth which Bell refers to as the answer to capitalistic oppression and elite classism?

What did Bell experience at Stanford relative to classism? What surprised Bell about some of the elite white students she encountered there?

More summaries and resources for teaching or studying Where We Stand: Class Matters.

Where We Stand: Class Matters from BookRags. (c)2023 BookRags, Inc. All rights reserved.