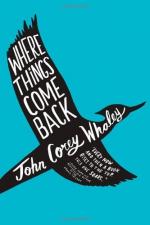 Where Things Come Back Setting & Symbolism

John Corey Whaley
This Study Guide consists of approximately 47 pages of chapter summaries, quotes, character analysis, themes, and more - everything you need to sharpen your knowledge of Where Things Come Back.

Small town in Arkansas, Lily is located almost exactly half-way between Memphis and Little Rock. Lily is a town with an abundance of trees and apparently a population of 3,947.

This is the nickname given to Russell Quitman, earned for the many times "Quit, man. Quit!" could be heard as he tortured those less fortunate.

This is Cullen's opinion of pretty girls who all seem to prefer boyfriends or men who treat them like garbage. This is one of the most baffling phenomena Cullen can think of.

This is the name of the river that runs alongside the edge of Lily, Arkansas.

This is the burger joint that Lucas and Cullen drive to after Cullen is finished with family obligations involving his cousin Oslo and the identification of his body.

This is where Benton Sage is sent...

More summaries and resources for teaching or studying Where Things Come Back.

Where Things Come Back from BookRags. (c)2022 BookRags, Inc. All rights reserved.