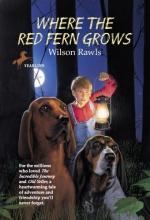 Where the Red Fern Grows Overview

Wilson Rawls
This Study Guide consists of approximately 80 pages of chapter summaries, quotes, character analysis, themes, and more - everything you need to sharpen your knowledge of Where the Red Fern Grows.

Where the Red Fern Grows Summary & Study Guide includes comprehensive information and analysis to help you understand the book. This study guide contains the following sections:

This detailed literature summary also contains Related Websites and a Free Quiz on Where the Red Fern Grows by Wilson Rawls.

Where the Red Fern Grows is a love story about Billy Coleman and two redbone coonhounds during the Great Depression.

Ten-year-old Billy was consumed by a desire to possess such hounds and hunt the Illinois River bottoms for Mr. Ringtail near his home in northeastern Oklahoma. Just any old dog would not do. They had to be good redbone coonhounds. Since his parents were unable to grant his request for dogs, Billy prayed and felt God surely would help him and give him heart, courage, and determination. He found an ad for the kind of dogs he wanted in a sporting magazine left at a campsite by some fishermen. He dug a K. C. Baking Powder can out of the trash and cleaned it up to use as a bank for his money and set about earning the necessary fifty dollars, a nickel and a dime at a time. He caught crawdads and minnows, dug worms, and gathered vegetables, which he sold to the fisherman who drove into the Ozarks to vacation and fish. In berry season, he picked berries and sold them to his grandfather for his general store for ten cents a bucket. In the winter he trapped small animals and sold their skins.

Billy's mother was concerned for her children growing up with no formal schooling, only what she provided for them at home. She was dismayed at the thought that they would feel out of place among people in town and longed to move so her children would grow up with the benefits of an education.

After two years, Billy had the necessary money to order the pups. He took his K. C. Baking Powder can of money and the ad to his grandfather's store and asked for help ordering the pups. Grandfather was astonished by what Billy had accomplished and consented to order the pups. After what seemed an eternity, the pups arrived at the freight station thirty miles away. Billy walked the distance to bring his pups home.

A lengthy time of training ensued. With the help of a raccoon skin, Billy spent hours teaching his pups, Old Dan and Little Ann, every trick he knew a raccoon could pull on a dog. His training and devotion to his pups paid off with night after night of hunting in the hills and river bottoms surrounding his home. Pure joy filled those days and nights.

Pelt after pelt adorned the barn wall. As he took the pelts to his grandfather's store, he and his grandfather regaled coon hunters, gathered at the general store, with tales of the miraculous things his dogs could do.

Life is not without problems and neither was Billy's life. The Pritchard family has two boys, one older than Billy and one his age, Rubin and Rainie, respectively. They are mean and always pick fights. They challenge Billy and his dogs to a coon hunt.

Unable to resist their insults, Grandpa puts up the two dollars to meet their wager and threatens to come after them if they harm Billy in any way. After Old Dan and Little Ann tree the "Ghost Coon" that no one has been able to tree, the night turns ugly.

Rubin and Rainie jump Billy when he refuses to kill the coon. Rubin falls on the ax that Billy always carries hunting and dies.

Billy is riddled with guilt and cannot forget the sight for a long time after.

Shortly after that incident Billy's grandfather enters Billy and his dogs in a prestigious coon hunting contest staged in an area near their home. By now Billy is fourteen. Grandfather provides the entry fee, food, camping equipment, and transportation and takes Billy and his father to the contest.

Twenty-five pairs of the best coonhounds in the country converge to determine which dogs are the best in the country. On the fourth night when it is Billy's turn to hunt his dogs, a sudden sleet and snow storm sets in. Conditions are treacherous, but Old Dan and Little Ann do not let the dangers of freezing or getting lost in the unfamiliar territory deter their determination to hunt.

In a blinding storm, they tree the most coons and win the contest, a gold cup, and three hundred dollars.

Billy cares little for the money he receives each time he sells pelts to his grandfather. He turns it over to his father thinking that he is contributing to the family income. However, his father has saved all of it and after the coon hunting contest, gives it to his wife. She believes God has answered her prayers to move her children to town but knowing they cannot separate Billy and his dogs, they make arrangements for Billy to stay with his grandfather. However, this scenario never happens as one night Billy's dogs chase and tree a mountain lion who is too much for them. Old Dan is horribly injured in the ensuing fight and dies. Little Ann loses her will to live without Old Dan and also dies. The loss is tragic for Billy and his family.

The story ends on a positive note as the family prepares to leave their home for a home in town. Billy goes to visit the graves of his beloved dogs one last time. There he finds the legendary "red fern" growing up between their graves and arching over them.