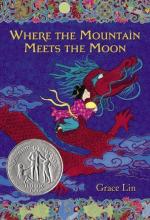 Where the Mountain Meets the Moon Summary & Study Guide

Grace Lin
This Study Guide consists of approximately 29 pages of chapter summaries, quotes, character analysis, themes, and more - everything you need to sharpen your knowledge of Where the Mountain Meets the Moon.

Where the Mountain Meets the Moon Summary & Study Guide Description

Where the Mountain Meets the Moon Summary & Study Guide includes comprehensive information and analysis to help you understand the book. This study guide contains the following sections:

This detailed literature summary also contains Topics for Discussion and a Free Quiz on Where the Mountain Meets the Moon by Grace Lin.

Where the Mountain Meets the Moon is a young adult fiction book written by Grace Lin, the result of Lin's re-conception of Chinese stories she knew as a child in Asian-American form. The book has a unique structure since it places small stories within the storyline as a whole and draws complex connections between these sub-stories and the story generally. The main character of the book is Minli, a young Chinese girl from the Village of the Fruitless Mountain. Her family is very poor and Minli very much wishes she could change her family's fortune. Her parents, Ba and Ma, are left in the dust when Minli leaves them to go on a quest to fix her family's fortune after hearing tales of the Old Man of the Moon, who knows the future and has the power to change fortunes.

Minli encounters many surprises and challenges on her way to see the Old Man of the Moon. She first meets Dragon, a dragon caught in ropes in the forest and who was born out of a painting one hundred years ago commissioned for the evil Magistrate Tiger, who is in some ways the villain of the book. Dragon cannot fly and Minli invites Dragon to come with her to see the Old Man of the Moon to see if he can fix Dragon's problem. To find the Old Man of the Moon, Minli and Dragon must find the Never-Ending Mountain, but there are other landmarks along the way. Their first stop is the City of the Bright Moonlight which is divided into inner and outer halves. The King of the city lives within the inner city and a local buffalo boy tells Minli that the King can be found in the outer city of the market in the day. Minli is able to meet him and he gives her a borrowed line which is written on a piece of apage that Magistrate Tiger had torn out of the Old Man of the Moon's Book of Fortune. Outside of the City, Dragon is given a string of destiny which is another borrowed line by the Guardians of the City, living stone tigers.

On their way towards the mountain, Dragon and Minli encounter the evil Green Tiger, the reincarnated spirit of Magistrate Tiger, who claws Dragon and poisons him as a result. Minli goes to find a cure and encounters two twins, A-Fu and Da-Fu, who trick Green Tiger into falling in a well. Along with their grandfather, A-Gong, they treat Dragon with their local Dragon Well Tea, made from leaves of trees whose seeds fell from the sky. When Dragon is healed, Minli and Dragon follow A-Fu and Da-Fu to Never-Ending Mountain. They find they cannot climb it, so they combine their borrowed lines to make a kite to fly up to the moon. The string turns into a bridge and Minli is able to travel up to the Moon and visit the Old Man of the Moon. The Old Man of the Moon then presents Minli with a stark moral choice: she may ask only one question of him. She is torn. On the one hand, Minli can ask him how to help Dragon fly and on the other she can ask how to fix her family's fortune.

In that moment, Minli realizes that her fortune is not so bad and that she can be content with her life. She then asks Dragon's question. The Old Man of the Moon has her remove a rock on Dragon's head. He can then fly and flies her back to her village. It turns out that the rock on Dragon's head is a Dragon Pearl which makes her village fabulously wealthy, changing her family's fortune. Dragon also meets his mother, Jade Dragon, who then changes Fruitless Mountain into Fruitful Mountain, allowing it to grow again. Minli, Ba and Ma live happily ever after.

More summaries and resources for teaching or studying Where the Mountain Meets the Moon.

Where the Mountain Meets the Moon from BookRags. (c)2022 BookRags, Inc. All rights reserved.