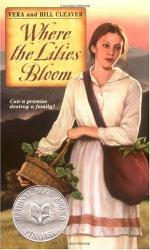 Where the Lilies Bloom Quotes

Vera Cleaver
This Study Guide consists of approximately 61 pages of chapter summaries, quotes, character analysis, themes, and more - everything you need to sharpen your knowledge of Where the Lilies Bloom.

"I have never forgotten what he said - that this land was fair land, the fairest of them all. This is where the lilies bloom." Chapter One, p. 3.

"He's let things beat him, Roy Luther has. The land, Kiser Pease, the poverty. Now he's old and sick and ready to die and when he does, this is what we'll inherit - his defeat and all that goes with it." Chapter One, p. 11.

"You never did anything right to anybody, Kiser, and so you deserve to die, but I'm not going to let you." Chapter Two, p.27.

"You don't thank people who set you in bondage and hold you there year after wretched year. You hate them. And if it isn't in you to hate, as it had never been in Roy Luther, then you do second best; you pick up and get out. And if that isn't possible...

More summaries and resources for teaching or studying Where the Lilies Bloom.

Where the Lilies Bloom from BookRags. (c)2020 BookRags, Inc. All rights reserved.