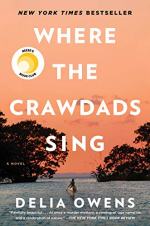 Delia Owens
This Study Guide consists of approximately 40 pages of chapter summaries, quotes, character analysis, themes, and more - everything you need to sharpen your knowledge of Where the Crawdads Sing.

Where the Crawdads Sing Summary & Study Guide includes comprehensive information and analysis to help you understand the book. This study guide contains the following sections:

This detailed literature summary also contains Quotes and a Free Quiz on Where the Crawdads Sing by Delia Owens.

The following version of this book was used to create this study guide: Owens, Delia. Where the Crawdads Sing. New York: Penguin Random House LLC, 2018.

The novel’s main narrative opens in the marshland near the fictional town of Barkley Cove, North Carolina. Seven-year-old Catherine “Kya” Clark lives in a shack in the swamp with her mother, father, and siblings. However, one day, Kya’s mother leaves the shack forever in order to escape the physical abuse inflicted by Kya’s father. Kya’s siblings soon leave on their own as well, leaving only Kya and Pa. Pa spends increasingly more time away from the shack over the years, and when Kya is about ten years old, Pa leaves forever. Kya has become thoroughly self-sufficient by this time, living on the land and occasionally trading in town for necessary supplies.

When Kya is 14 years old, a kind local boy named Tate Walker begins to visit Kya, and he teaches her how to read. He is about four years older than Kya. He also gives Kya his old textbooks from school. When Kya is 15 years old, she and Tate fall in love, but Tate insists that they do not have sex until Kya is older. Tate soon leaves for college, and although he promises to love and remember Kya, Kya feels abandoned. When Kya is 19 years old, she suddenly becomes attracted to a young local man named Chase Andrews. Chase begins visiting her often. Chase says that he loves her and is eager to have sex with her. Kya refuses at first, but after about a year, she consents to sex.

Tate eventually returns to Barkley Cove in order to perform scientific research on the marshland. He visits Kya and asks for forgiveness, but she refuses to take him back. Tate sees that Kya has performed much of her own research on the marshland, and he urges Kya to submit it to publishers. Tate also warns Kya that Chase is a dishonest womanizer. One day, Kya sees in the newspaper that Chase has become engaged to someone else. She is heartbroken. Later, she submits her research to publishers, and when she is 22 years old, a book of her research is published under her name. Kya’s brother Jodie sees the book in a store and returns to the swamp to reconnect with Kya. Jodie encourages Kya to give Tate another chance.

Chase eventually visits Kya and says that he wants to continue his relationship with her, despite the fact that he is married to someone else. When Kya refuses him, Chase tries to rape her. She hits him and escapes. Kya realizes that because Chase is such a popular member of the town, and because she is an outcast for living in the swamp, she has no recourse. One day, in October of 1969, Chase’s body is found near the swamp. He appears to have fallen—or possibly have been pushed—out of a fire watchtower. The sheriff investigates and arrests Kya. However, the evidence is inconclusive and circumstantial, and Kya is acquitted. She and Tate declare their love for each other, and they live together in the swamp. Kya continues her career as a naturalist, and Tate continues his career as a researcher. Kya dies at age 64, after which Tate finds evidence that seems to prove that Kya killed Chase. He disposes of the evidence so that no one will ever find it.

More summaries and resources for teaching or studying Where the Crawdads Sing.

Where the Crawdads Sing from BookRags. (c)2022 BookRags, Inc. All rights reserved.