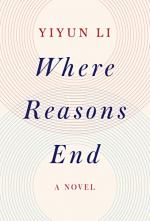 Related Topics
Gold Boy, Emerald Girl: Stories
Immortality
Dear Friend, From My Life I Write to You in Your Life
The Book of Goose

Yiyun Li
This Study Guide consists of approximately 37 pages of chapter summaries, quotes, character analysis, themes, and more - everything you need to sharpen your knowledge of Where Reasons End.

This detailed literature summary also contains Quotes and a Free Quiz on Where Reasons End by Yiyun Li.

The following version of this book was used to create the guide: Li, Yiyun. Where Reasons End. Random House, 2019.

The novel begins with a son addressing his mother in a place of timelessness. The son has died, and the mother, through her will, has created a place where the two may speak to one another. A conversation ensues, one where the two weave through a number of topics both philosophical and personal. Nikolai asks his mother if his death was a tragedy, but the mother responds that she has no other adjectives but sad and changes the topic. She relates personal stories of her youth and infers that if she had perished at sixteen it would have been considered a tragedy. The mother’s fascination with the word deadline, one connecting time, space, and death, continues the thread of speaking about language usage between them. The mother wonders where Nikolai’s poems are, perhaps wanting to create a chapbook of them, but he dismisses the idea. When they cannot recall a particular poem title by Elizabeth Bishop, Nikolai divulges that, where he is, such details are not what knowing is for him. They both agree life is not lived by metaphors, but argue about adverbs, leading the mother to wonder whether such quibbling is necessary.

The mother recalls the last time she sees her son alive and wishes she knew more about the missing eight hours before his death. When she tells him the corner where she last saw him has autumn leaves, readers realize Nikolai is unable to see the physical world. She recalls a story her son wrote and knows his skills and imagery would have made a fine writer. They speak of Nikolai’s dislike of adults, especially their false belief of knowing all the answers. When Nikolai compares himself to chocolate the mother cannot have, she wonders what could possibly come out of metaphor and analogy, but Nikolai infers they meet each other in these shared words. They begin a philosophical conversation on the difference between how and who one is and the difference between somebody and nobody. Seven weeks from Nikolai’s death, the mother wonders how long the conversation with him can continue.

The mother has dreams with Nikolai, and she contemplates starting a dream diary. The mother considers his dream presence a delusion but knows so are the conversations she is having with him. They debate whether one needs a certain amount of delusion in order to live or to die. The family settles into a new home after Nikolai’s death, but the mother wonders if she could ever settle without him; he was able to fill a space more than the rest of the family (mother, father, younger brother) combined. She recalls Nikolai’s favorite pastime, baking. It had helped Nikolai relax, but he reassures her that what used to bother him no longer does. He knows he could forgive everyone for being imperfect except himself. Nikolai wonders why parents even have children, and the mother responds with hope. The mother feels something unnamable and wants to name it in order to discard it, though Nikolai suggests letting it settle instead.

The mother and Nikolai continue to debate language usage, recall memories from Nikolai’s childhood, like at three he stubbed his toe on a rock, to events just prior to his death. They debate philosophical issues, like whether fear or hope keeps humans going and what is between somewhere and nowhere. When the mother asks if Nikolai suffers, he says some things are always with him. She knows contentment was not a strong trait of his. She relives the conversations with Nikolai the day of his death, and the novel ends with their knowing there are always more questions than answers.

More summaries and resources for teaching or studying Where Reasons End.