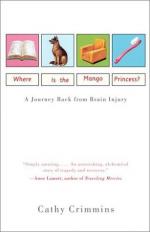 Where Is the Mango Princess? Summary & Study Guide

C. E. Crimmins
This Study Guide consists of approximately 25 pages of chapter summaries, quotes, character analysis, themes, and more - everything you need to sharpen your knowledge of Where Is the Mango Princess?.

Where Is the Mango Princess? Summary & Study Guide Description

Where Is the Mango Princess? Summary & Study Guide includes comprehensive information and analysis to help you understand the book. This study guide contains the following sections:

This detailed literature summary also contains Topics for Discussion and a Free Quiz on Where Is the Mango Princess? by C. E. Crimmins.

Where is the Mango Princess? is humorist and author Cathy Crimmins' account of her husband Alan Forman's boating accident that left Alan with significant brain injury, and the subsequent hospital care and rehabilitation efforts the family had to endure.

Cathy, Alan, and seven-year-old daughter Kelly won a raffle for a vacation at a remote location called Bob's Lake in Kingston, Ontario. The vacation went pretty miserably, and on the last day they were ready to head home. Alan took a boat trip to take away dirty laundry and garbage from their cabin. On the way, a reckless teenager drove over Alan's boat, knocking him in the head and causing massive bleeding and bruising. Kelly was in the boat and witnessed the accident.

Alan was airlifted to Kingston General Hospital, and there were many anxious days of Alan receiving intensive care. Family and friends arrived to support Cathy. Alan was stabilized, but she was told Alan's injuries were quite severe, and that he might not be the same person. There were uncertainties as to whether Alan could walk again, or exactly what motor and cognitive activities he could perform after rehabilitation.

Since the family was from Philadelphia, Alan was airlifted to the Hospital of the University of Philadelphia, or HUP. Trouble with approving the air ambulance represented the first fight in what would be a war with the family's U.S.-based health insurance HMO. Cathy strongly comes down on the side of the national health care system of Canada versus the United States' private-based health care. The HMO limited Alan's rehabilitation time, and denied benefits in other areas.

Alan went from Magee to a day hospital to finally home, with Cathy as his caregiver. Cathy described her struggles with adjusting to the "New Alan" and also of trying to deal with her traumatized daughter Kelly, who blamed herself for Alan's injury and who was verbally abused by Alan, because he could not help it.

In the end, Alan regained most of his abilities. He returned to part-time work, he could attend plays and parties, and in most areas he was able to compensate for his disability. However, his personality had changed permanently, and Cathy experienced a great sense of loss for the man she once knew.

Where Is the Mango Princess? from BookRags. (c)2022 BookRags, Inc. All rights reserved.