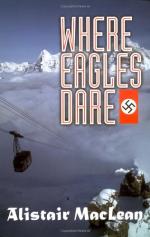 Alistair MacLean
This Study Guide consists of approximately 41 pages of chapter summaries, quotes, character analysis, themes, and more - everything you need to sharpen your knowledge of Where Eagles Dare.

This detailed literature summary also contains Topics for Discussion on Where Eagles Dare by Alistair MacLean.

Where Eagles Dare is a thriller/action novel by acclaimed British author Alistair MacLean. Published in 1967, the novel is set during the Second World War and the action takes place over a 36 hour period in the early part of 1944. The novel follows Major John Smith and a small team of allied agents who parachute onto a mountain in Germany and attempt what appears to be an impossible rescue mission. The novel was made into a motion picture in 1968 starring Richard Burton and Clint Eastwood.

On a snowy night in early 1944 a hastily assembled team of seven men led by British Major John Smith parachute onto a mountain in Southern Germany. A moment after the last man jumps a young woman named Mary Ellison jumps after them; the only male team member who knows about her presence is Smith. The team had been assembled just a couple of hours before by the director of M.I.6, Vice Admiral Rolland, and his deputy, Colonel Wyatt-Turner. The unlikely team consists of four M.I.6 officers - Carraciola, Thomas, Christiansen, and Torrance-Smythe - an American Lieutenant named Schaffer, and Sergeant Harrod. Wyatt-Turner explains that an American general has been captured by the Germans and is being held at Schloss Adler - "the castle of the eagle" - an impregnable fortress castle in the mountains of Southern Germany. The team's mission is to parachute onto the mountain, get into Schloss Adler, and rescue the general.

When the team reassembles after the jump, they find Sergeant Harrod dead. Smith leads the team several hundred feet down the mountain and has them make camp. He then doubles back after telling the team that he has forgotten to take a code book Harrod was carrying and meets up with Mary. He then examines Harrod's body closely and sees that he has been murdered. Smith returns to his team and several hours later leads them down the mountain into a small village with Mary Ellison secretly following behind. Schloss Adler sits on a peak several hundred feet above the village, and the only way up or down is via a cable car. There is a large military barracks in the village, but Smith and his men are dressed in German Army uniforms and so blend in.

After stashing their equipment at a deserted railway station, Smith leads the team to a pub in the village where he separates from the others and rendezvous with Heidi, a British agent who is working at the pub as a barmaid. He then meets Mary behind the pub where she has been waiting and introduces her to Heidi who has arranged a job for Mary on the serving staff at Schloss Adler. Smith tells Mary that the American who has been captured by the Germans is not a general at all but an American actor named Jones and then says that the mission has been planned for weeks, but will tell her nothing else. On his way back around to the pub entrance Smith finds the dead body of Torrance-Smythe, who has also been murdered. Back in the pub Smith takes Lieutenant Schaffer aside and tells him what he told Mary, but does not tell the rest of the team. A squad of soldiers then enters the pub and arrests the team. They are taken away in two cars; Smith and Schaffer in one car, and the other three in another.

Smith and Schaffer manage to escape while Mary is taken up to Schloss Adler on the cable car by a Gestapo officer so that she can start to work there. Smith and Schaffer get back to the railway station and radio London. Smith tells Rolland and Wyatt-Turner to have transport ready in 90 minutes. Wyatt-Turner tells Rolland that he wants to go on the plane being sent to rescue the team, and Rolland agrees. Smith and Schaffer then secretly ride up to Schloss Adler on the roof of the cable car that is transporting the other three team members and their guards to the castle. Once there, Mary helps them get inside. Smith leads Schaffer to a platform overlooking a huge room where they see the American actor Cartwright Jones along with Colonel Kramer, a German Secret Service officer and Reishmarschal Rosemeyer, the German Army Chief of Staff. The three are soon joined by Carraciola, Thomas, and Christiansen whom Colonel Kramer praises as being the three most effective spies the Germans have in England.

Smith and Schaffer enter the room with their machine guns ready, but Smith quickly hits Schaffer and disarms him. Smith convinces Kramer that Carraciola, Thomas, and Christiansen are really British double agents and that he is actually a German spy. Smith then tells Kramer to have Carraciola, Thomas, and Christiansen each write out a list of all the German agents working in England. If their lists match the one that Smith has, then they are German agents; if the lists do not match, they are imposters. After the three traitors finish their lists Smith overpowers the single guard in the room and takes the lists. Schaffer grabs his machine gun, and Mary soon joins them. Smith tells the three traitors that he intends to take them back to England for trial and he, Schaffer, Mary, and the actor Cartwright Jones manage to get their prisoners to the castle's cable car station. In the station the three traitors overpower Schaffer and head down the mountain in a cable car. Smith is able to stop them, although he ends up killing all three, and then gets the others down the mountain safely.

The four surviving team members meet Heidi in the village. After a high speed escape over snow covered roads the five of them make it to a small airfield where they meet the rescue plane with Colonel Wyatt-Turner aboard. As they are flying back to England, Smith shows the Colonel one of the lists he got from the traitors, and Wyatt-Turner then points his machine gun at Smith and tells the pilot to land in Germany. Smith tells Wyatt-Turner that Admiral Rolland had suspected him of being a traitor for months, and that part of the reason for the mission was to prove it. After he finds that the machine gun Admiral Rolland gave him is useless, Wyatt-Turner commits suicide by jumping out of the plane, and the five team members return to England.

More summaries and resources for teaching or studying Where Eagles Dare.