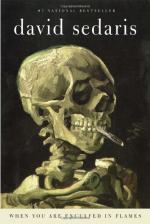 When You Are Engulfed in Flames Summary & Study Guide

When You Are Engulfed in Flames Summary & Study Guide Description

When You Are Engulfed in Flames Summary & Study Guide includes comprehensive information and analysis to help you understand the book. This study guide contains the following sections:

This detailed literature summary also contains Quotes and a Free Quiz on When You Are Engulfed in Flames by David Sedaris.

David Sedaris, the author, grew up middle class in North Carolina in the 1960s in a house filled with four sisters and one older brother. The abundant ironies and contradictions of his childhood formed a staid background from which he later felt an ever-present wanderlust to roam about the world as an adult, exploring his past through a prism of the present in perpetual motion. By travelling and then writing about the experiences, his feelings and thoughts became more clearly delineated to himself and his readers, often with hilarious results.

David's life is complicated by his relationships and his ambiguity about them. His lover, Hugh, is a constant source of companionship for many, many years. In effect and outcome, they are happily married, though the book takes place before such unions were legal. Rather than become embroiled in the political and social implications of such a relationship, however, David -- while openly gay if pressed by anyone asking his preference -- instead chooses to enmesh himself in his writing workload and studious eye for the absurdities going on around him. It's an insular but eye-opening manner he uses to see the world through his own point of view, even when events and persons in it threaten to topple his carefully crafted loner approach to living life on his own terms.

Because When You Are Engulfed in Flames is a collection of first-person essays, there is no overall plot or singular theme to it as a book. However, each essay connects to the previous and following chapter stylistically in that it presents another angle to the complex lifestyle David creates for himself. There are constant themes through each chapter that -- while they seemed diverse beyond union upon first reading -- actually tie together with a consistent view of the world by the author. Indeed, although this is a collection, the essays originally appeared in such diverse magazines as GQ, The New Yorker, and other periodicals.

In "It's Catching," Sedaris examines how people use scary stories about parasites harming humans to communicate with one another in a visceral, if fearful, manner. In "Keeping Up," the author writes lovingly about his dependency on his lover Hugh, who is forever striding ahead of David when they travel and leaving David in the figurative dust. In "The Understudy," David recalls a week-long nanny hired by his mother who turned out to be a profligate white trash woman and put the children through a form of living hell. In "This Old House," David recalls when he moved into a boarding house because it contained a lingering sense of nostalgia of olden times. In "Buddy, Can You Spare a Tie?" he reminisces about the many bad fashion choices he'd made in life, including wearing a bow-tie and the Stadium Pal, a device which collected urine in a bag so sports attendees didn't have to miss any of their game. "Road Trips" covers David's experiences as a young man with people who come onto him while offering hitchhiking rides, and how he declined the offers owing to his own sense of confused sexuality. "What I Learned" is Sedaris' imaginary reflection on his attending Princeton and how it inadvertently set his course to become a writer through no initial inspiration of his own. "That's Amore" details Sedaris remembering his New York City neighbor Helen, an elderly woman who bossed everyone she encountered with ruthless precision. "The Monster Mash" is a morbid recollection by the author of visiting a medical examiner's office for a week and his subsequent obsession with seeing only death everywhere he looked. "In the Waiting Room" recounts David's sitting in his underpants in a Parisian medical office while other patients filed in and awkwardly co-occupied the space with him. "Solution to Saturday's Puzzle" details the author having to decline a fellow jet traveler's request to change seats so she could be seated by her husband. "Adult Figures Charging Toward a Concrete Stool" concerns David's parents and their sudden interest in collecting art for their home. "Memento Mori" details David's purchase of a human skeleton for his artist lover Hugh, and how the morbid gift haunted the writer afterwards. "All the Beauty You Will Ever Need" portrays the author purchasing pot from a redneck North Carolina couple and their inherent fascination with gay sex as a straight couple. "Town and Country" is a juxtaposition between a wealthy couple David encountered on a jet who were just as profane and vulgar as the poor immigrant taxi cab driver David encountered after leaving the airport. "Aerial" examines the author in France having to thwart a group of birds who were insistently trying to smash into the cottage windows and work their way inside. "The Man in the Hut" details Jackie, a nearby French neighbor, who was convicted of child molestation. "Of Mice and Men" is a memoir about a mouse who set fire to a man's home, and how perspective about an event when retold could entirely change its meaning. "April in Paris" concerns David's obsession with April, a spider he found in his French country home, and his growing fascination with her habits and feeding techniques. "Crybaby" is a meditation about grief, both genuine and the kind of forced play-acting at pretending to be sad over a loss of life. "Old Faithful" is a memoir about Hugh lancing a boil on David's backside. "The Smoking Section" is a two-part essay detailing David's attempt to quit smoking by spending time in Japan, immersing himself in a foreign culture as a means of distracting himself from his habit of chain-smoking.

When You Are Engulfed in Flames from BookRags. (c)2022 BookRags, Inc. All rights reserved.