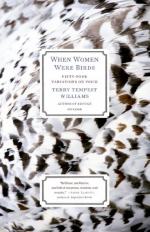 When Women Were Birds Summary & Study Guide includes comprehensive information and analysis to help you understand the book. This study guide contains the following sections:

This detailed literature summary also contains Topics for Discussion on When Women Were Birds by Terry Tempest Williams.

According to Terry Tempest Williams' memoir, “When Women Were Birds,” Mormon women write journals and have children. Williams was shocked to discover that all the journals her mother had left to her were blank. Williams’ memoir reflects her struggle to reconcile the meaning of the blank journals, as well as her search for her own unique voice.

Williams tells her readers that she began writing her book at age fifty-four, the same age her mother was when she died. Looking back on her life, Williams realizes how naive she once was and how she has matured since her mother’s death. In her first chapter, Williams describes how her mother made a point of telling Williams she was leaving her journals to her. Her mother died all over again when Williams realized her mother had not recorded any thoughts on a single page of any of the books. Since those journals were blank she decided to use them to chronicle her own journey to discover her purpose in life as she puzzled through her mother’s reasoning for not writing in the journals.

This beautifully written book includes a good deal of imagery that focuses on birds, wildlife, and nature. Williams describes the formative moments of her life as she discusses her discovery of the many things her mother’s blank journals represented. Her experiences include almost losing a job as a school teacher because she shared her ideas as an environmentalist with her students. Williams worked on a political conservation committee where she decided that she was not one to argue policy and work against other environmental groups in favor of her own. She describes her decision of going back to school rather than having children as a taboo among her Mormon family. She also talks about her own illness and its possible effect on her ability to speak and write. She refers to the title she chose for her book “When Women Were Birds” in the conclusion of her story as she says she must learn to greet each day and night with joy. Williams believes that long ago women were birds. As birds, they knew how to greet life with joy. Modern women have forgotten how to celebrate the joy in life. This has caused them to suffer.