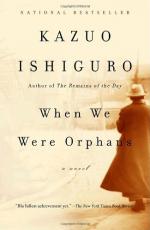 When We Were Orphans Summary & Study Guide

When We Were Orphans Summary & Study Guide Description

When We Were Orphans Summary & Study Guide includes comprehensive information and analysis to help you understand the book. This study guide contains the following sections:

This detailed literature summary also contains Topics for Discussion and a Free Quiz on When We Were Orphans by Kazuo Ishiguro.

When We Were Orphans is set in England and Shanghai prior to World War II. Christopher Banks, the narrator and main character of the story, was born and raised in Shanghai before he is sent back to live with his aunt upon the mysterious disappearance of his parents. In Shanghai, he has a Japanese friend Akira, who lives next door. When his father disappears, Akira starts a game of detectives, apparently to try to help Christopher cope with the situation. This game is at the root of the vocation he eventually chooses and attains prominence by. He becomes a detective.

In London, he quickly becomes well-renowned for his ability to solve cases that others can not. At the beginning of his career, the solving of these difficult cases in England consumes him It also satisfies him. However, as his career stabilizes, he starts to feel a necessity to return to Shanghai and solve the case of his parents' apparent kidnappings. He feels, in fact, that the world is relying on him to solve this mystery and save it from the turmoil that has befallen it. By then, he has adopted Jennifer, an orphan like him and the thought of abandoning her causes him much distress. However, he feels that even she would not be able to respect him if he shirked his calling.

Upon arrival in Shanghai, he sees that the city he knew so well is ravaged by the Sino-Japanese war; the officials whose cooperation he needs are corrupt; and all clues lead nowhere. He is frustrated and discouraged. Nothing is as it seems in Shanghai and he despairs of ever being able to solve the case.

While there, he runs into Sarah Hemming, the evasive woman that he has known since the early years of his career. Sarah is now unhappily married to a man addicted to gambling and opium. She asks Christopher to run-away to Macao with her. In a moment of disenchantment with his own mission, he agrees and shows up to the meeting place. The two share one kiss, but at the last moment, he decides that he absolutely must follow one last lead to bring him to where his parents are imprisoned. His intention is to return right away and set sail with her. However, things do not go smoothly and he is unable to return to her within a reasonable amount of time. She sets off to Macao without him. They never see each other again.

As for the lead, it turns out to be a complete waste. However, in time, he does acquire access to the one man who knows everything. This is the man he grew-up calling Uncle Phillip. Christopher has long known about Uncle Phillip is deeply connected to his mother's kidnapping. Now he learns from Uncle Phillip that his parents' disappearances, which he always assumed had something to do with their courageous stand against opium, were due to causes much less noble. His father had simply left Shanghai with his mistress and died of typhoid fever in Singapore. His mother was kidnapped by a War Lord to be his concubine. Christopher would find her in a mental institute in Hong Kong.

The book ends with Christopher being content that he had pursued his mission to the end. His vocation, however, has made his life a lonely one. Jennifer and the anticipation that she might one day marry and have children, is his one consolation.