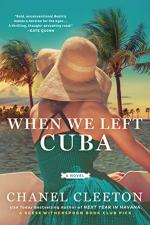 Related Topics
Next Year in Havana

Chanel Cleeton
This Study Guide consists of approximately 54 pages of chapter summaries, quotes, character analysis, themes, and more - everything you need to sharpen your knowledge of When We Left Cuba.

When We Left Cuba Summary & Study Guide includes comprehensive information and analysis to help you understand the book. This study guide contains the following sections:

This detailed literature summary also contains Quotes and a Free Quiz on When We Left Cuba by Chanel Cleeton.

The following version of this book was used to create the guide: Cleeton, Chanel. When We Left Cuba. Penguin Random House, 2019.

The year is 1960, Fidel Castro has overthrown the Cuban government, and three hundred miles away at a party in Palm Beach, Florida, Beatriz Perez has just turned down her fifth marriage proposal. The Perez family was forced to flee Cuba and relocate to Palm Beach after Castro’s takeover, leaving everything behind, except for their middle daughter Beatriz’s heartbreaking habits, which have followed her to the United States. After rejecting her fifth suitor, Beatriz steps out on to the balcony, leaving behind the party inside, which is still buzzing over the failed proposal, and breathes in the salty night air. She’s interrupted by a devastatingly handsome man, Nick Preston, who joins her outside. Beatriz is used to men looking at her, but she’s not used to Nick’s searing gaze, or the way her matches her intellectually. They share a dance and, for the first time in her 22 years, it appears that Beatriz may have met someone worth breaking her failed proposal streak for.

She’s in for two surprises however, as Beatriz learns that the mystery man who caught her fancy is actually a U.S. Senator, and also an engaged man. At the same party, on the same balcony, Beatriz is joined by another man, Mr. Dwyer. A CIA agent, Dwyer has sought out Beatriz’s help to overthrow Castro’s reign in Cuba. Even though the stakes are deadly and she has been warned not to trust Dwyer, Beatriz would rather die for Cuba then see it fall into Castro’s hands. She holds a personal vendetta against the dictator after he stripped her family of their land and wealth, and personally executed her twin brother, Alejandro. Alejandro’s best friend Eduardo also relocated to Palm Beach and although he keeps himself very busy charming the women of South Florida, he, too, wants to take his country back from the grip of dictatorship. Eduardo arranges Beatriz’s meetings with the CIA, hoping that her curves will catch Castro’s eye and help them plan an assassination attempt. He takes his own midnight meetings with the CIA, trafficking crates of dynamite across Palm Beach.

If Beatriz is not bemoaning the fact that she is unmarried, her mother certainly is. While the rest of the family pines for Cuba, her mother has thrown herself into the glittering social circles of Palm Beach, trying to help her family regain the social status they once held in Cuba and trying to forget about her son Alejandro’s violent death. Castro’s goons dumped his body on the family’s front driveway, his blood pooling into the cobblestones. Her other sisters, Isabel, Elisa and Maribel, have also busied themselves with finding their own husbands in south Florida, so no one notices when Beatriz slips out to New York for a weekend on assignment from Mr. Dwyer. Castro will be in Harlem, meeting with representatives and the CIA want Beatriz to try and seduce him. She arrives in quite a form-fitting dress and Castro definitely takes notice. Overwhelmed by being so close to her brother’s killer, Beatriz leaves and returns to her hotel where a familiar face surprises her at the bar. Nick Preston, Beatriz’s handsome, engaged senator and favorite dance partner, takes her to dinner and then walks her back to her hotel room, where the two confess their feelings for each other and begin their love affair.

When Beatriz returns home, Dwyer tells her that the CIA was impressed with her work in New York and gives her a new assignment: infiltrating a meeting of communists in Hialeah, Florida. Also upon returning home, Beatriz continues meeting in secret with Nick Preston at a beach home he’s bought for the two of them. The two find comfort in each other: while Beatriz can’t seem to stop dreaming about her brother and Castro’s violent takeover, Nick has his own nightmares that wake him up, too, as he’s plagued by his memories of the war. Meanwhile, new hope for Cuba’s cause arrives with the election of John F. Kennedy, who actually happens to be a close personal friend of Nick Preston. Eduardo leaves for Cuba with the failed Bay of Pigs invasion, confessing his love for Beatriz before he departs. The invasion fails, and Eduardo is captured.

Heartbroken that Nick didn’t tell Beatriz how hopeless the invasion was from the very beginning, Beatriz breaks off their relationship. Rumors of their affair circle and at a party one night, Beatriz is confronted by Nick’s fiancée in the bathroom. Desperate to distance their family from the scandal, Beatriz’s parents send her to a cousin in Spain. She heads for the airport, where Mr. Dwyer finds her at the terminal and gives her a new mission. The CIA will send her to university in London where she’ll attempt to discover if one of their agents, Ramon, is actually working as a double agent. She accepts and finds herself even further from Cuba and even closer to the CIA. One night, she’s tasked with intercepting a microfilm at a gala from an important colonel and she completes the mission, even though she’s disarmed by a familiar face: Nick Preston. In town on business, Nick is just as surprised to see Beatriz and old feelings come rushing back as he tells her he’s broken off his engagement. She returns to her London flat the next morning, where another familiar face surprises her in the shadows of her apartment. It’s Ramon—and he wants the microfilm. He holds Beatriz at gunpoint and confirms the CIA’s suspicions that he’s always been working as a double agent. She struggles and kills him, fleeing to Washington with Nick and leaving Ramon’s body in her apartment for the CIA to clean up.

In Washington, Nick and Beatriz have become an official couple, yet she still doubts that she’d make a good wife for a politician, especially now that she’s killed a man. She continues working with the CIA, and while the whole world spins from Kennedy’s assassination, she is given her most important task yet: she is to go to Cuba directly and meet with Castro, himself. Armed with poison and her charms, Beatriz departs for Havana. Recently released after being held in Castro’s prison camps for eighteen months after the failed invasion, Eduardo is by Beatriz’s side on her mission and he arranges a meeting with Beatriz and Castro.

Castro finds her motives to be as transparent as the dress she’s wearing to seduce him. He calls her out and Beatriz falters, knowing it is all over, that her life is totally at the mercy of Fidel Castro. He tells her that he will not hurt her, he wants her alive to take a message back to the Americans. He also has his own message for Beatriz: he did not have anything to do with her brother’s death. Reeling from the information, Beatriz returns to Eduardo, who shocks her with more news: he ratted her out to Fidel. He only took the meeting because he knew Beatriz was an agent for the CIA. She leaves her Havana hotel and goes to her childhood home, where she digs up a box of family heirlooms in the backyard. She hears footsteps in the sugarcane and turns around to find herself face to face with one of the silent participants of the communist meetings she attended in Hialeah. He holds a gun to her head, prepared to kill her out of loyalty to Fidel, and a shot rings out. Eduardo has followed her to the house and shot Sergio to protect Beatriz and prove that he’ll never betray her again. She flies back to the United States, forever ending her relationship with Nick Preston. Despite the fact that he’s her soulmate she can’t compromise his reputation with her own.

She passes Castro’s message on to Dwyer and continues working with the CIA, returning to her family in Palm Beach. She attends school, choosing to study political science, and she goes on to become a lawyer. The novel flashes forward to the announcement of Fidel’s death in 2016. Beatriz is an old woman, but she celebrates with a glass of champagne, toasting alone to the fact that her country is finally out of Castro’s clutches. It is a time to celebrate with company, and she meets Nick Preston, also an old man, at her front door. His wife has died and his children are grown. Retired from politics, he and Beatriz can finally start a life together without either of their careers affecting the other. Fidel’s death is a new start for Cuba and a new start for Beatriz’s life.

More summaries and resources for teaching or studying When We Left Cuba.

When We Left Cuba from BookRags. (c)2022 BookRags, Inc. All rights reserved.