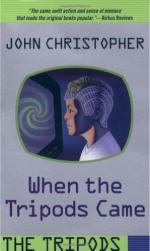 When the Tripods Came Topics for Discussion

In what ways does the quote from the Preface (see Quotes, Preface, p. vi) relate to the action of the narrative?

Research and discuss ways the quote from the Preface (see Quotes, Preface, p. vi) relates or applies to other conflicts—military, moral, social, or terrorist, for examples.

Discuss ways in which the book's plot and sub-plot interact. In other words, in what ways do events in the...

When the Tripods Came from BookRags. (c)2023 BookRags, Inc. All rights reserved.