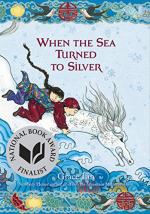 When the Sea Turned to Silver Summary & Study Guide

Grace Lin
This Study Guide consists of approximately 38 pages of chapter summaries, quotes, character analysis, themes, and more - everything you need to sharpen your knowledge of When the Sea Turned to Silver.

When the Sea Turned to Silver Summary & Study Guide Description

When the Sea Turned to Silver Summary & Study Guide includes comprehensive information and analysis to help you understand the book. This study guide contains the following sections:

This detailed literature summary also contains Quotes and a Free Quiz on When the Sea Turned to Silver by Grace Lin.

The edition of the book used to create this study guide is as follows: Lin, Grace. When the Sea Turned to Silver. Little Brown, 2016. First Edition.

In Grace Lin’s young adult novel When the Sea Turned To Silver, the line between folklore and reality is blurred. Told in past tense, it focuses on the protagonist Pinmei, who lived in a small mountain village with her storytelling grandmother until one night when the emperor’s soldiers attacked her village and kidnapped her grandmother. Pinmei’s grandmother, Amah, was imprisoned by the emperor, and Pinmei along with her companion Yishan began a journey to rescue her. Pinmei and Yishan had heard rumors that the emperor was after a Luminous Stone, and as such they made the decision to look for one to exchange for Amah's freedom.

While in the Hall of Distant Clouds, Pinmei and Yishan hatched a plan to look in the emperor’s encampment for Amah after everyone else was asleep. While they crept around the outskirts of the encampment they encountered Yanna, who was looking for Kaijae’s son, who was also taken by the emperor. Pinmei and Yishan were attacked in the camp, and in the skirmish they found themselves across the Long Walkway, a passage they were told to avoid as no one had crossed it and lived afterwards. From their side of the bridge, they witnessed the emperor and King KaiJae, who were discussing the Luminous Stone and the Paper of Answers, which only King KaiJae could read. The Paper of Answers revealed that the emperor would achieve immortality, to the horror of children and KaiJae. After the emperor left, the children and KaiJae shared stories of the Green Tiger, who was KaiJae’s ancestor. When they were attacked again by the emperor, KaiJae gave them the Paper of Answers, and told the children to flee with Lady Meng. They escaped again, and found themselves in the House of Wu, where they were given temporary protection from the emperor’s soldiers by Haiyi.

Lady Weng and the children could not stay for long in the House of Wu, and after briefly staying there, they separated, with the children heading to the Sea Bottom, the kingdom of Lady Weng’s father. While there, they discovered that the Black Tortoise of Winter was trapped by the emperor, and for as long as he was held captive, the cold, winter would continue. Yishan and Pinmei asked the Sea King about the Luminous Stone, and it was revealed that the Sea King had it in his possession, as well as the Iron Rod and the Red Stone. The Sea King took the children to see the Luminous Stone, which was revealed to be the moon. Yishan and Pinmei attempted to steal the Luminous Stone, and were stopped by the Sea King. Embarrassed, they told him that they were only joking, and Pinmei began to despair that they would never be able to rescue Amah. Yishan then pointed out that they could ask the Paper of Answers, and it was revealed that the emperor had captured the Black Tortoise of Winter with the Iron Rod.

The group then left for Capital City to confront the emperor, where they arrived just in time for the funeral of Lady Meng’s husband. The emperor, enamored with Lady Meng, had been trying to coerce Lady Meng into marrying him she told the emperor that she could only remarry after her husband had a proper burial. Immediately after the funeral, Lady Meng disappeared into the water, and a fish tail was visible. Amah was brought out, and it was revealed that the emperor was, in fact, after Yishan, who turned out to be the Ginseng Boy and was capable of bestowing immortality. In the ensuing chaos, Yishan was able to steal back the Iron Rod from the emperor, and in doing so she freed the Black Tortoise of Winter, thus restoring order.

More summaries and resources for teaching or studying When the Sea Turned to Silver.

When the Sea Turned to Silver from BookRags. (c)2022 BookRags, Inc. All rights reserved.