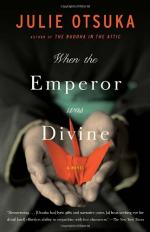 Related Topics
The Buddha in the Attic

When the Emperor Was Divine: A Novel Summary & Study Guide

Julie Otsuka
This Study Guide consists of approximately 29 pages of chapter summaries, quotes, character analysis, themes, and more - everything you need to sharpen your knowledge of When the Emperor Was Divine.

When the Emperor Was Divine: A Novel Summary & Study Guide Description

When the Emperor Was Divine: A Novel Summary & Study Guide includes comprehensive information and analysis to help you understand the book. This study guide contains the following sections:

This detailed literature summary also contains Topics for Discussion and a Free Quiz on When the Emperor Was Divine: A Novel by Julie Otsuka.

The novel When the Emperor Was Divine tells the story of a Japanese-American family separated and incarcerated after the outbreak of World War II. The novel begins in Berkeley, California in the days leading up to the forced relocation and follows the family until their return after the war.

The first chapter comes from the perspective of the mother. She has been packing for nine days after first seeing announcements requiring all people of Japanese descent to report for relocation. She completes the majority of her work while the children, a girl and a boy, are in school. Some of the tasks she completes would upset the children, so she does these while the children are away. She must complete these tasks alone because her husband is away, having been arrested immediately after the Japanese bombing of Pearl Harbor.

The second chapter comes from the perspective of the eleven-year-old daughter while three of the family members are on an eastbound train. The family has been confined at a horseracing track for the past four and a half months, and now they are on their way to a relocation camp in Utah. The girl observes events on and off the train as if she is on an adventure rather than on her way to a long confinement.

The third chapter takes place inside the Topaz War Relocation Center in Central Utah. It comes from the perspective of an eight-year-old boy. He understands things as an eight-year-old, but the reader will gather far more than the boy. In addition to witnessing events and conditions inside the camp, the narrative from the boy's perspective tells a great deal about his love for his family and his intense longing for his father who is imprisoned at a camp in New Mexico.

The fourth chapter of the novel is set back in Berkeley and begins immediately after the family returns to their home. It comes from a first person plural perspective, and it is a collective perspective of both children. The children are wiser and perhaps a bit cynical as they observe how conditions and attitudes have changed during their absence. While they had been wealthy before being relocated, they now have no financial assets beyond owning their empty and ransacked home. Employment prospects for Japanese-Americans are few, and the family must work hard just to survive. The father is finally released and joins the family at home in Berkeley. The children struggle to try to understand how their father, though still caring, has changed such a great deal in their years apart.

The fifth and final chapter is distinct from the previous four chapters in that it comes from a singular first person narrator, the father. This short but powerful chapter illustrates the father's views on having been accused of being a dangerous "enemy alien" and taken from his family and his livelihood. The chapter could narrowly address those who made him suffer, or it could address all who allow themselves to think in stereotypes. The final chapter also serves as a sort of epilogue for all those who were wrongly incarcerated based on national origin.

More summaries and resources for teaching or studying When the Emperor Was Divine: A Novel.

When the Emperor Was Divine: A Novel from BookRags. (c)2022 BookRags, Inc. All rights reserved.