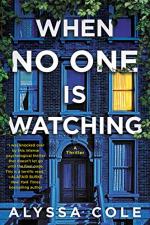 When No One Is Watching Setting

Alyssa Cole
This Study Guide consists of approximately 48 pages of chapter summaries, quotes, character analysis, themes, and more - everything you need to sharpen your knowledge of When No One Is Watching.

Gifford Place is a fictional neighborhood in present-day Brooklyn, a borough of New York City. The neighborhood has long been home to a close community of Black residents living in historic brownstones. Gentrification brings more white couples and proprietors each day, displacing Sydney’s beloved neighbors and shops to make room for trendy renovations.

Sydney lives in her mother's house, a home she still shares with Drea. The house is across the street from Theo and Kim, and next door to Terry and Josie. Sharing a fence with the Ulnars means Sydney is privy to the constant racist ideologies spewed by Terry and Josie.

The house is a critical piece of VerenTech's puzzle. Yolanda's refusal to give up the house, followed by Sydney's desperate attempts to preserve her mother's property, epitomize the struggle Black communities face against gentrification. Sydney fields pressure from real estate agents...

More summaries and resources for teaching or studying When No One Is Watching.

When No One Is Watching from BookRags. (c)2022 BookRags, Inc. All rights reserved.