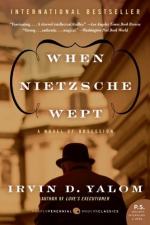 Irvin D. Yalom
This Study Guide consists of approximately 31 pages of chapter summaries, quotes, character analysis, themes, and more - everything you need to sharpen your knowledge of When Nietzsche Wept.

This detailed literature summary also contains Topics for Discussion and a Free Quiz on When Nietzsche Wept by Irvin D. Yalom.

Dr. Josef Breuer is a successful Viennese doctor. In 1882, a young woman by the name of Lou Salome comes to visit him while he is on vacation in Venice. She asks him to try and treat her friend Friedrich Nietzsche for despair. She believes she is the reason he is so depressed and is afraid he might commit suicide and deprive the world of one of its greatest philosophers. She persuades Dr. Breuer to treat him but tells him Nietzsche must not know of her involvement, and it would be best if he didn't realize that he was actually being treated by a physician.

On advice from his friends, Nietzsche travels to Vienna to see Dr. Breuer. He has been afflicted with migraines and feels desperate for help with them. Nietzsche is reluctant to put his trust in Dr. Breuer, but after Dr. Breuer saves Nietzsche from a brutal migraine attack in the middle of the night, their relationship improves.

Nietzsche agrees to enter a hospital for a month under Dr. Breuer's care on the condition that Nietzsche help Dr. Breuer with his despair. Dr. Breuer's marriage is in a terrible state, and he feels there's nothing left to live for. At first, their counseling sessions are volatile and competitive, but over time, the two men overcome their pride and work on helping each other.

Nietzsche is obsessed with Lou Salome, the woman who came to see Dr. Breuer in Venice. Dr. Breuer is obsessed with a woman named Bertha Pappenheim, who was one of his patients until recently. The men's obsessions interfere with their abilities to have normal relationships. Dr. Breuer finds himself spending hours every day thinking about Bertha, and these obsessions tear him away from his wife and children.

Dr. Breuer has a young medical student named Sigmund Freud. Breuer helps Freud with his studies, and Freud acts as a sounding board for Breuer's research. They are also personal friends and spend a great deal of time together. Freud is very interested in Breuer's therapy with Nietzsche.

One day, Breuer and Nietzsche take a walk in the cemetery where Breuer's father, mother, and brother are buried. There, Nietzsche realizes that Breuer's mother's name was Bertha, and he plunges into philosophizing about the fear of aging and dying. Breuer is overcome with all the emotions and thoughts involved in this conversation. When he arrives home, he asks Freud to come over and hypnotize him. While he is hypnotized, Breuer acts out his dream of leaving his current life and starting all over again by making conscious decisions about where to work, who to marry, and everything else. Through this hypnotism, Breuer realizes that he has already chosen the life of his dreams, and he is able to let go of his Bertha obsession.

Once he is recovered, Breuer can finally help his friend Nietzsche recover from his own obsession with Lou Salome. Nietzsche realizes that the roots of his obsession are in his fear of loneliness. To Nietzsche, Lou Salome represented a true friend and companion, a meeting of the minds, and a romantic partner. He is able to move on from his obsession and continue his life's work of writing about philosophy.

More summaries and resources for teaching or studying When Nietzsche Wept.