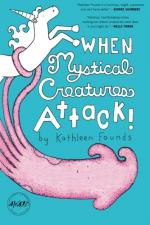 This detailed literature summary also contains Quotes and a Free Quiz on When Mystical Creatures Attack! by Kathleen Founds.

When Mystical Creatures Attack by Kathleen Found is an award winning collection of short stories that chronicle a short span of time in the life of a young teacher in Texas. It begins with Laura Freedman reading over some essays from her students.

The prompt has been that they are to choose mythological creatures that they admire, then have that creature solve some sort of world problem. Through the essays the reader learns that Ms. Freedman teaches the lower level reading class and that it is her first year of teaching. One of her students, Kristi, is pregnant by another of her students, Danny. Janice Gibbs is a goth girl with a bad home life, and Cody Splunk is a very talented nerd type that doesn't test well. There are other students in the classroom, but the main students interact with Laura more.

The reader sees that initially Laura loves teaching, or the idea of teaching, but that eventually she sees that what she had assumed and what the reality truthfully was were two different things. She becomes more tired and despondent. Then, for no reason, as far as the students knew, their teacher picks up a terrarium and throws it out of the window telling them that she's done. Then, she simply disappears.

One of the students, Janice Gibbs is determined to find Ms. Freedman. Janice works at a nursing home and aspires to being a doctor. She finally tracks down Ms. Freedman who has been admitted to Bridges Wellness Center, which Janice calls 'the looney bin'. Laura had stopped taking her meds for bipolar disorder and had a break with reality.

Laura finds herself unhappy with the regimented program at Bridges. They have a Wellness Points system and residents are required to 'play' the Wellness game. Laura usurps the system as often as she can, but does participate in the journaling exercises. She receives letters from Janice and the reader learns that Laura had left the classroom that day, then boarded a bus for Arizona where authorities found her sitting on a park bench feeding hamburgers to pigeons. They called her brother Stephen, who had her committed.

Janice wants to know when she will be coming back because the substitute, whom they all call The Sir, is terrible. Laura says that they can't possibly miss her that much since they abused her so religiously, even going so far as to steal her personal journal. Janice tells her that she is wrong...they loved her.

Janice receives a letter from Bridges saying that Laura can no longer have outside stimulus as it will derail the therapy. Janice has problems of her own. Her father has moved to Ky for work and has moved in with his longtime girlfriend, Glenda (who hates Janice). Acting out, Janice tells her father that she's failing and insinuates that while living at her aunt's house that she's having sex with Danny. Glenda suspects that Janice is lying and verifies that none of that is happening. She threatens Janice. Janice learns that Glenda has her real mother's email address and asks for it in exchange for staying away. They agree. Janice is disappointed when she reaches out to her biological mother, and is rejected yet again. In an act of defiance she gets drunk and sleeps with Danny.

Janice ends up pregnant and is determined to starve herself into a miscarriage. She is told that one can't do that, that it doesn't work that way, but one day she does miscarry. Janice, who has been raised Catholic, believes that she has committed a mortal sin and cannot forgive herself. She loses her job at the nursing home because she was found to be taking some of the resident's pills. She takes pain killers after she was attacked on the job at the convenient store, and becomes addicted.

Meanwhile, back at Bridges, Laura is exploring her memories of her father and her mother. She realizes that her both of her parents disappointed her for various reasons. The only unconditional love she had as a child was from a kindly neighbor woman named Frankye. When Frankye died it changed Laura and she decided to help others and to be kind, like Frankye. This influenced her to become a teacher and to help the poor.

Janice is arrested for stealing money from her cashier's drawer at the store. Going through withdrawal she is rescued and bailed out of jail. She lives in a halfway house where she reads Ms. Freedman's old journal, which she stole from Danny (who had had it all this time). She reads something in the journal that makes her realize that she needs a change. She calls her father and asks to come home. It becomes a turning point for her and she goes to community college and straightens her life out.

Laura is eventually released from Bridges and begins writing a popular blog called Uncommon Happiness. Many people write to her for advice about happiness. As much as she's able to offer insight, she does. She is married to a man named Ben and they decide to have their first child. Meanwhile, she learns that one of her students, Cody Splunk, is now a famous author. She is so proud of him.

Cody contacts Janice and they go out. Later, Cody proposes to her, but she rejects him. They continue to speak to one another until one day, she realizes that she has been stupid and they ride away together in the sunshine (on the back of an Unicorn if Cody's story is to be believed).

Laura, unfortunately, has not fared as well. In order to have the child, whom she's named Rose, she's had to go off of her medications. At first it is manageable, but by the time she has Rose, she's having full blown episodes. When they bring the baby to her to breastfeed she looks at the baby in horror, declaring that this child is not her baby. She has a breakdown and they have to institutionalize her. After a few weeks they have her back on her meds and it seems that things are fine. Then she disappears with the baby.

Ben is frantic and in two days' time the police find the baby abandoned, and safe, in a gas station bathroom. But Laura is still gone. Janice comes to Laura's house and hands Ben Laura's old journal. She thinks that maybe it might help. Ben reads the journal hoping for insight.

Meanwhile, Laura has made her way back to her father's home, which is up for sale and vacant. Her mother has met her in a cemetery and suggested that she go to the old house to end it all. Laura argues with her mother but gives in and at least goes to the house. She drives into the garage and shuts the door with the car running. She dreams.

In the dream an angel offers her a chance at redemption. Laura takes hold of the apple that is offered and it pulls her out of hell. Attached to her ankles are the souls of her father, mother, and others. Instead of kicking them loose for holding her down, she turns toward the angel, determined to save them all.