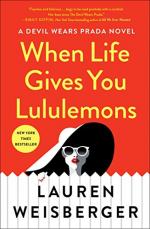 Lauren Weisberger
This Study Guide consists of approximately 42 pages of chapter summaries, quotes, character analysis, themes, and more - everything you need to sharpen your knowledge of When Life Gives You Lululemons.

When Life Gives You Lululemons Summary & Study Guide includes comprehensive information and analysis to help you understand the book. This study guide contains the following sections:

This detailed literature summary also contains Quotes and a Free Quiz on When Life Gives You Lululemons by Lauren Weisberger.

The following version of this book was used to create the guide: Weisberger, Lauren. When Life Gives You Lululemons. Simon & Schuster, 2018.

The novel is told in third-person, and the chapters switch perspectives between three main characters: Emily, Miriam, and Karolina. Emily, who had been the assistant of Miranda Priestly, the editor-in-chief of Runway magazine, lived and worked in Los Angeles as a PR agent. But, when she started losing clients to Olivia Belle, a younger agent, and her husband left town on an extended business trip to Hong Kong, Emily went to Greenwich, Connecticut, to stay with her friend Miriam.

Miriam was a high-powered lawyer in New York, but six months prior to the start of the novel she left her job after her husband, Paul, sold his start up for millions of dollars. They moved to the suburbs to raise their three children in a beautiful and safe neighborhood. Miriam, bored and at a loss for what to do with her time, started gaining weight and worrying that her husband was cheating on her. When Miriam heard that her old friend Karolina had been charged with a DUI, she knew that her friend was innocent.

When Karolina was pulled over with her stepson Harry and his friends in the car, she was charged with a DUI without being given a breathalyzer after the police found champagne bottles in her car that she did not know the origin of. When she got out of jail, her husband, Graham, a senator with dreams of running for president, was furious with her. He kicked her out of their house and she went to stay in their Greenwich house by herself.

Graham went on Anderson Cooper and publicly announced that he was leaving Karolina, without ever talking to her about it. He started to date Regan Whitney, the daughter of a former US president. He also started keeping his biological son, Harry, away from Karolina. Since Harry’s mother died giving birth to him, and since Karolina raised Harry since he was two, Karolina was the only mother Harry had ever known, and she considered him her son. Desperate to win her son back, Karolina hired Emily to act as her PR agent.

Miranda Priestly asked Emily to return to Runway magazine, and her husband Miles asked her to come with him to Hong Kong, but Emily declined the offers in order to dedicate herself to clearing Karolina’s name and getting her custody of Harry. She stayed in Greenwich at Karolina’s house and started a flirtation with a single Dad, Alistair. She goes so far as to kiss him at a party, but then she realized that she did not want to take things any further.

Emily organized a trip for the three women to stay at a spa in Utah so that Karolina could pretend like she was attending rehab, which would restore her reputation and the public’s perception of her. After they returned, Karolina hired Miriam to act as her lawyer during the divorce. Miriam unveiled a major secret: Graham had a vasectomy. He allowed Karolina to believe that she was the one who could not get pregnant. She underwent years of fertility treatments, and he never told her the truth.

Once Karolina learned the truth about Graham, she revealed his darkest secret to Emily: He hit a four-year-old girl when he was seventeen and killed her. His family covered up the crime. Emily took the information to Miranda Priestly and agreed to return to work for her at Runway magazine if Miranda would help blackmail Graham into giving Karolina custody. Miranda used her connections with Regan’s father to intimidate Graham into acquiescing to Karolina.

More summaries and resources for teaching or studying When Life Gives You Lululemons.

When Life Gives You Lululemons from BookRags. (c)2022 BookRags, Inc. All rights reserved.