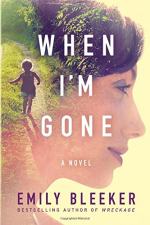 Bleeker, Emily
This Study Guide consists of approximately 48 pages of chapter summaries, quotes, character analysis, themes, and more - everything you need to sharpen your knowledge of When I'm Gone.

This detailed literature summary also contains Quotes and a Free Quiz on When I'm Gone by Bleeker, Emily.

The following version of this book was used to create the guide: Bleeker, Emily. When I’m Gone. Lake Union Publishing, 2016.

Told by a third person narrator, Bleeker’s novel follows Luke Richardson after the death of his wife Natalie. The novel is divided by the days of the month from January to August.

“January” begins with Natalie’s funeral. She had died after her battle with Ewing’s sarcoma, a rare type of cancer. Luke returns from the funeral with his three children, 14-year-old Will, nine-year-old May and three-year-old Clayton. On arriving home, Luke finds a letter from Natalie that had been delivered that day. The next day another letter arrives from her, telling him to make pancakes for the children the day after her funeral. He receives five letters within the 10 days following her funeral. Luke goes back to work and sends the children back to school at her request.

In “February”, Luke interviews Jessie, a 21-year-old college student Natalie had known. She had asked him in one of her letters to hire her to help take care of the children. Luke likes Jessie and agrees to let her help. Luke is called into Will’s school for a meeting with his guidance counselor, Ms. Mason. She tells him Will had told her he thought he was adopted. Luke confronts Will and Will shows him an envelope he had found among Natalie’s things. The envelope was from an adoption agency, Maranatha House, dated around the time of Will’s birthday. Luke knows that Will is his son but is confused by the envelope along with a name he recognizes printed on the envelope, Dr. Neal.

In “March”, Luke goes through Natalie’s phone, finding Dr. Neal in her contacts. Luke decides to ask Natalie’s best friend Annie is she knows anything about this person and she told him she had briefly met a Pastor Neal who had visited Natalie while she was sick.

In “April”, Luke visits Maranatha House. He is unable to find out any information, however as he leaves, he notices a picture of Natalie on the wall with her high school boyfriend, Andy. When he returns home, Luke does not tell Will about the photo but hands him a brochure from Maranatha. Will notices Andy in a photo and asks Luke to call him. Luke receives one of Natalie’s letters asking him to open up to the possibility of finding love again. Luke is angered by this, wondering about the secrets Natalie had been keeping.

In “May”, Luke throws a birthday party for May. During the party Brian, Annie’s husband asks if Luke will act as a reference for him for a new job. While talking to Annie, Luke notices a bruise on her face and worries that Brian has been hitting her. Luke worries about allowing Annie to babysit Clayton in her house with Brian there and makes up an excuse to collect Clayton after he drops him off there one morning.

In “June” Luke and Annie fight after she finds out he is going on a date with Ms. Mason. Luke enjoys his date but realizes he is not ready for a relationship. Annie and Luke apologize to each other and Annie confirms that Luke is right about Brian abusing her. Luke tells Annie about his doubts about Natalie and Andy and he agrees to go on a road trip with her to confront Andy. Natalie’s mother, Terry, sees the way Luke and Annie interact and questions whether Luke had been faithful to her dead daughter. Terry takes Luke’s children with her to Florida for their summer vacation.

In “July” Luke and Annie visit Luke’s hometown of Pentwater in order to confront Andy. During their visit Annie finds out that Luke had been abused as a child. Andy tells them that he had had a child he had given up for adoption and that Natalie had helped him. Luke finds out that Dr. Neal had worked at Maranatha House. Luke’s date with Ms. Mason is interrupted by distressed texts from Annie. Luke finds her along with a passed out Brian and takes her to his house. He tells Annie how his father had killed his mother and unborn sister. When she goes back to Brian the next day Luke tells her not to contact him until she is ready to leave Brian.

In August, Luke discovers that Natalie had gotten pregnant at 15 after their first time together. She had given up their daughter but had received a letter from Maranatha House telling her her daughter had been killed. When Luke’s children return from their trip, Jessie comes over to help but passes out. Luke sees from her medical alert bracelet that she is Dr. Neal’s daughter. On his way to the hospital, Luke is arrested for having pills in his car. He finds out while in jail that Brian had framed him. He is released after Annie turns on her husband, informing the police about the pills he had been stealing. Annie drives Luke to the hospital to see Jessie and reveals that she has feelings for him. In the hospital, Luke meets Dr. Neal and finds out that Jessie is really the daughter that Natalie had given up for adoption at the age of 15. Finding out that Jessie is her granddaughter, Terry donates her kidney to her in order to save her life.

More summaries and resources for teaching or studying When I'm Gone.