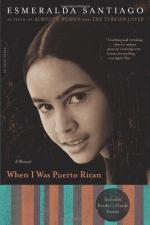 Plot Summary
+Chapters Summary and Analysis
Jibara and Fighting Naked
Someone Is Coming to Take Your Lap and American Invastion of Macun
Why Women Remain Jamona and Mami Gets a Job
El Mangle and Letters From New York
Casi Senorita and Dreams of a Better Life
Angels on the Ceiling and You Don't Want to Know
A Shot at It and Epilogue: One of These Days
Free Quiz
Characters
Objects/Places
Themes
Style
Quotes
Topics for Discussion
Order our When I Was Puerto Rican Study Guide

When I Was Puerto Rican Summary & Study Guide

Esmeralda Santiago
This Study Guide consists of approximately 28 pages of chapter summaries, quotes, character analysis, themes, and more - everything you need to sharpen your knowledge of When I Was Puerto Rican.

When I Was Puerto Rican Summary & Study Guide Description

When I Was Puerto Rican Summary & Study Guide includes comprehensive information and analysis to help you understand the book. This study guide contains the following sections:

This detailed literature summary also contains Topics for Discussion and a Free Quiz on When I Was Puerto Rican by Esmeralda Santiago.

Esmeralda Santiago recalls her life as a youngster in Puerto Rico. As a child she lives with her mother Ramona, father Pablo, and younger sisters Delsa and Norma. She recalls the birth of her first younger brother, Hector, and then the other siblings, Alicia, Raymond and Edna. Her parents are often angry with each other and her mother sometimes takes the children and moves in order to escape the relationship.

Eventually, Ramona begins working at a factory and the children are left with a neighbor. When Gloria runs off to be married, Ramona is unable to work for several days until Gloria's return. Eventually, Ramona says that she can't really rely on anyone other than the family and tells Esmeralda that she's going to have to be more responsible with regard to helping with the children and the housework. Esmeralda chaffs under the load but does her best, hating the chores and the monotony but does a great deal of work. One day, Esmeralda's cousin Jenny gets a new bicycle and begins taking the children for rides. When Raymond, who is very young, insists and Jenny overrides Esmeralda's demand that her siblings come home, Jenny takes off with Raymond on her bike. Raymond's foot is mangled in the chain of the bike and he's taken to the hospital. Esmeralda feels responsible though everyone agrees that it's Jenny who was in the wrong.

Raymond's foot continues to be a problem and the doctors begin talking amputation which prompts Ramona to take him to New York in an effort to find better medical treatment. Esmeralda is left behind with cousins and is angry, not at being left but at being left out of her mother's plans. Ramona soon makes another trip to New York and this time returns with a new hairdo, new clothes and a new sense of confidence. Esmeralda's father soon tells her that Ramona is planning to move to New York. Ramona takes there of the children, Esmeralda, Raymond and Edna, and saves for plane fare for the remaining four. Ramona becomes involved with another man, Francisco, who fathers a child and dies of cancer.

Esmeralda hates her life in New York, saying that she misses the nature of Puerto Rico. She hates the fact that there is so much crime in the city that she is seldom allowed away from the house alone and that all the children are kept cooped up inside most of the time.

Esmeralda is asked by a school official what she wants to do and she gives it some thought, eventually gaining some help gaining admittance into a school for performing arts. In the Epilogue, Esmeralda reveals that she was admitted to that school, that she graduated there and was, at the time of the writing, preparing for graduation from Harvard.

More summaries and resources for teaching or studying When I Was Puerto Rican.

When I Was Puerto Rican from BookRags. (c)2022 BookRags, Inc. All rights reserved.