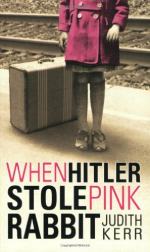 This detailed literature summary also contains Topics for Discussion and a Free Quiz on When Hitler Stole Pink Rabbit by Judith Kerr.

Judith Kerr's WHEN HITLER STOLE THE PINK RABBIT is a semi-autobiographical story about a nine year-old Jewish girl named Anna who lives with her family in Berlin just as the Nazis are rising to power in Germany. Anna has an older brother named Max. Her mother, just called "Mama," is a well-to-do housewife and her father, "Papa," is a famous writer and prominent critic of the Nazi regime and the Nazi party. The story is about the family's flight from the Nazis, who have put a price on Anna's father's head since he is one of their critics. The family moves from Weimar Germany to Switzerland, then to France and ends up in England, because Papa cannot find work in countries influenced by the Nazis, since they refuse to publish his work. The notable feature of the book, however, is that the complexities of pre-war European politics are seen through the eyes of a young girl, and are greatly simplified as a result. WHEN HITLER STOLE PINK RABBIT thus gives a simple picture of Europe prior to World War II easily digestible for children.

Anna's life in Berlin is relatively comfortable and uncomplicated. She is an eager student and has several friends. Her family is rich and she is generally happy. Anna begins to register the concerns of Mama and Papa just prior to the election of 1933, when the Nazis come to power. She and Max see kids whose parents are Nazis and Sozis (the opponents of the Nazis) fighting at school and she sees that her father is quite upset at the possibility that the Nazis will come to power. When they are elected, Papa has already left the country for Switzerland and sends for them weeks later.

When the family arrives in Switzerland, they must learn to speak a new German dialect and get along with the children in the Swiss countryside. Papa does his best to make a living, since the family is far, far poorer as a result of having to flee Berlin. Their belongings and assets had been seized (even Anna's little rabbit doll Pink Rabbit, for which the story is named). And despite the fact that Papa is a widely regarded author, the Swiss are so desperate to maintain their neutrality that they are hesitant to publish Papa's writing. Eventually this so angers and frustrates Papa that he leaves for France to work for a Jewish refugee newspaper, The Daily Parisian. Mama goes with him and the children are left behind under the care of family friends.

When Papa and Mama find a home for their family in Paris, Max and Anna must now learn French and fit-in at a French school. This is very trying for Anna in particular, until one day she can speak French with ease. In each place they live, Max and Anna adjust quickly. But just as they are beginning to feel at home in Paris, Papa again becomes frustrated at his inability to support his family and sends off a script to a Hungarian film maker in England. After several weeks, the film maker decides to produce Papa's script which leads him to take his family to England. The book ends as they arrive in London.